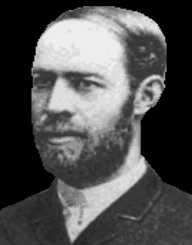 Heinrich Hertz was a physicist. His major work was proving the existence of electromagnetic waves.

Heinrich Rudolf Hertz was born on 22 February 1857, in Hamburg. His father Gustav Ferdinand Hertz was a Jew with the original name David and changed his name after converting to Christianity.

Heinrich Hertz mother was Anna Elisabeth Pfefferkorn. Heinrich was the oldest of five children born to the pair; he had three younger brothers and a younger sister.

Heinrich Hertz and his family were Lutherans, although David was born Jewish.

Heinrich Hertz attended a private school when he was six. Dr. Wichard Lange School for boys in Hamburg was operated by Friedrich Wichard Lange.

Heinrich did not learn the classical Greek and Latin but had science subjects. Heinrich was top of his class at school, showing a liking for science subjects and wanting to be an engineer.

In 1872, Heinrich Hertz went to Johanneum Gymnasium (Gelehrtenschule des Johanneums)  in Hamburg. He learned Arabic and Sanskrit there, at home he had private lessons for Greek and Latin. He took his Abitur examinations in 1875 and went to Frankfurt.

In Frankfurt, Heinrich Hertz worked in the building industry, while studying for the state examination. He became bored and dabbled in architecture for a little bit,  but decided to go to Dresden Polytechnic in 1876.

A few months later he had to do compulsory military service in Berlin. After a year in the railway regiment, Heinrich Hertz realized that he was on the wrong path once he returned to Technische Hochschule for engineering. With his father’s support, Heinrich Hertz went to study mathematics and mechanics, experimental physics and chemistry at the University of Munich at the age of twenty for a year.

Heinrich Hertz moved to University of Berlin for its better facilities in 1878, and it was standard practice. He was studying under Hermann von Helmholtz, who encouraged him to find a solution for a problem about electrical inertia.

Heinrich won the prize the next year, framing the questions as: does electricity has kinetic energy? He had demonstrated the electrical current would have a small mass, despite not knowing about the electron that carried it.

In 1880, Heinrich Hertz gained his Ph.D. with his thesis on electromagnetic induction, which took three months to write. He remained with his guide Hermann von Helmholtz for three years, serving as an assistant during his postdoctoral study at the Berlin Physical Institute.

Under the support of his mentor, Heinrich Hertz took advantage of the expansion of mathematical physics, and become a lecturer in mathematical physics at the University of Kiel. In his two years with the university, Heinrich wrote three papers, the most important one was a representation of his first work on Maxwell’s electromagnetic theory.

At age twenty- eight Heinrich Hertz had two professorship offers, but he accepted the one from the Technische Hochschule in Karlsruhe, owing to its research facilities. He started teaching at the University of Karlsruhe in 1885. While showing his students electric sparks, Heinrich came upon a few questions and devised experiments to find out.

He discovered that sparks generated from electricity produced a natural electrical vibration within the electric wires they jumped between. Heinrich Hertz soon devised an apparatus to prove that Maxwell’s theory was correct, that electromagnetic waves could spread and surge when sparks jump across a flash- gap. It was later known as radio waves, and it proved that electrical energy could be passed from one device to another via air. This discovery was considered Heinrich’s most exceptional.

In the next three years, Heinrich Hertz expanded upon the experiment to thoroughly verify Maxwell’s theory with his apparatus.

It demonstrated that electricity from his oscillators could be reflected, refracted, made to produce patterns and waves, just like light. Plus, radio waves and light waves were from the same family: the electromagnetic spectrum.

Despite his discovery, Heinrich Hertz did not believe that the discovery had any practical implications.

Heinrich Hertz chose to take the position of Professor of Physics and Director of the Physics Institute in Bonn, and ordinary professorship he held until his death in 1894. Heinrich wanted to continue to work on Maxwell’s theory and theoretical mechanics.

The Principles of Mechanics Presented in a New Form was published after his death.

Owing to Heinrich Hertz work, in 1901 Guglielmo Marconi had transmitted a wireless signal across the Atlantic Ocean from Britain to Canada. Many more communications technology products came such as radio, television, and mobile phones and they rely on electromagnetic waves, which was discovered by Heinrich.

Radio Astronomy was made possible by the ability to detect radio waves, where astronomers could listen to lightning storms on Jupiter and Saturn.

Hertz in his honor is used to denote wave frequency.

Heinrich Hertz had the Matteucci Medal in 1888 from The Italian Society of Sciences. Two years later he was given the Rumford Medal by the Royal Society.

In 1892, Heinrich had an infection, causing severe migraines, which he underwent surgery for. Heinrich Hertz died of granulomatosis with polyangiitis, an autoimmune disorder. He was thirty-six years old when he passed away in Bonn, Germany in 1894. Heinrich was buried in the Ohlsdorf Cemetery in Hamburg.

Heinrich Hertz wife Elisabeth did not remarry, and his children never married. The family left for London during 1930 to escape Nazi