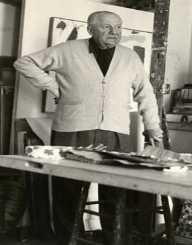 Hans Hofmann was a renowned German-born American painter and an art teacher. Born on March 21, 1880, he is one of the chief influencers of Abstract Expressionism. He contributed to the early 20th-century European avant-garde and influenced cubism; fauvism, neo-impressionism, and symbolism while the US.

His painting works include The Wind, 1942, Effervescence, 1944, The Gate (1959–60), Pompeii (1959). Hoffman was not just a reputed artist but also a distinguished teacher with students including Joan Mitchell, Helen Frankenthaler, Louise Nevelson, and Lee Krasner among others.

Hans Hofmann was born on March 21, 1880, in Weißenburg in Bavaria in Germany to Theodor Friedrich Hofmann and Franziska Manger Hofmann. When he was six years, the family moved to Munich, where a father became a government worker. He received education in Munich. Growing up, Hofmann had less interest in mathematics and science.

At the age of 16, he picked a job in the public sector as an assistant to the director of Public Works of the Bavarian government. It was during this period that he increased his knowledge in mathematics. He would develop and patent several devices including a radar device for ships at sea, an electromagnetic comptometer, a portable freezer unit for military use and sensitized light bulb.

Hans Hofmann gained a keen interest in art studies and studied arts under German artist Moritz Haymann in 1899. To enhance his knowledge in painting, he traveled to Paris where he studied at the Académie de la Grande Chaumière and later AcadémieColarossi.

While there, he took an active interest in Paris's avant-garde art scene and worked with French artist Henri Matisse. He also befriended artists like Sonia Delaunay, Picasso, and Georges Braque and his works were deeply influenced by the Cubist and Cezanne. Hofmann left Paris for Germany before the start of the World War I.

Hans Hofmann combined his teaching career with painting while in the United States. He became very influential in the art circles with his abstract paintings and his works drew the attention of museums, critics, and dealers in the United States. Hoffman’spainting works inclined to Cubism and Cezanne regarding the structure and by Van Gogh and Henri Matisse his use of color.

His abstract works include Spring, The Wind, 1942, Fantasia, 1943 and Effervescence in 1944. In 1944, he held his debut New York solo show at Peggy Guggenheim's of This Century gallery. He was also featured in a solo exhibition at The Arts Club of Chicago that same year. He began an annual exhibition at the Kootz Gallery in New York starting from 1947 through 1966 except 1948.

Hans Hofmann's other works include The Gate (1959–60), Pompeii (1959) or To Miz - PaxVobiscum.The Whitney Museum organized a retrospective exhibition in 1957. The exhibition was replicated in seven other museums in the United States. Hoffman alongside artist like Frank Kline, Philip Guston, and Theodore Roszak represented the United States at the Venice Biennale in 1960. The Museum of Modern Art gave a full-scale retrospective for him in 1963, and it traveled two more years to five other venues in the US, museums in Buenos Aires and Caracas, in the Netherlands, Italy, and Germany.

Hans Hofmann established a strong reputation as an astute teacher in both Germany and the United States. In 1915, he established an art school SchulefürBildendeKunst (School of Fine Art) in Munich. As a teacher, he built on the ideas of Cezanne, the Cubist, and Kandinsky. His students included Louise Nevelson, Worth Ryder, Alfred Jensen, and Alf Bayrle among others.

Hans Hofmann also ran summer sessions Australia, Croatia, France, and Italy. He moved to the United States in 1930 after receiving an invitation from his former student Worth Ryder. He initially ran summer session at the University of California, Berkeley and Chouinard Art Institute in Los Angeles.

Hans Hofmann permanently settled in the US in 1932. During this time, he taught at the Art Students League of New York, in 1933. He balanced teaching with artworks and influenced the avant-garde art scene in New York. He opened an art school and during summer, offered classes in New York and Princetown until 1958 when he retired from teaching.

Hans Hoffman married twice first to Maria “Miz” Wolfegg in Munich. He became an American citizen in 1941. Maria died in 1963 after surgery. He married his second wife Renate Schmitz in 1965. Hans Hofmann died from a heart attack on February 17, 1966, at age 85 in New York City.