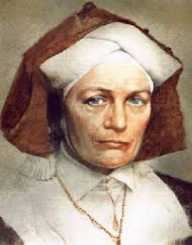 Saint Hildegard was born on September 16, 1098, in Böckelheim, West Franconia, Germany. She is also known as Hildegard of Bingen and the Sibyl of the Rhine. Born into nobility, she was the youngest child among her parent’s ten children. Her parents, father Knight Hildebert and mother Mechtild of Merxheim-Nahet were in the service of the Count Meinhard of Sponheim.

They decided to dedicate their youngest child’s life to the service of God immediately after her birth. Accordingly, Hildegard’s parents enrolled her into the Benedictine monastery in Mount St. Disibod when she was only eight.

There, Saint Hildegard began receiving the required education for becoming a nun. She was placed under the care of a secluded nun called Jutta, sister of Count Meginhard. The reclusive nun lived in Disibodenberg, Mount of St. Disibod in the Diocese of Speyer. She later became the Mother Superior.

Celtic traditions governed the Benedictine monastery, where both Hildegard and Mother Superior lived. The Celtic tradition did not discriminate between men and women. It allowed people belonging to both genders to live and study there.

Only their residential accommodations were separate. Hildegard grew up in the monastery learning Latin and other religious texts. She became proficient in these courses once she attained her youth. Besides holy scriptures, she also learned to play the ten-stringed psaltery. This stringed musical instrument was usually performed during the chanting of religious hymns called psalm.

Saint Hildegard received the status of a nun when she turned eighteen. As per history, at times, she experienced visions of communicating with God. However, she kept this a secret until she received the status of Mother Superior. In 1136, Mother Superior Jutta passed away. Upon the death of Jutta, fellow nuns of the monastery consensually elected Hildegard as her successor.

Once Hildegard attained the status of Mother Superior, she made the news of her vision public. She declared that on the command of God, she has to spread the knowledge of her vision among the masses.

Accordingly, Saint Hildegard engaged herself in compiling and describing her visions over the next decade. She also provided an in-depth analysis and significance of her visions. Her work attracted the attention of the Papacy. Pope Eugenius III formed a commission of inquiry to look into the integrity of her work.

The commission denounced the theory of her visions and her teachings so far. However, Pope outrightly rejected their observations and approved to her work.

The reputation of Saint Hildegard as an essential religious figure was on the rise. The Disibodenberg monastery gradually became overcrowded as the number of new entrants willing to embrace monasticism was increasing day by day.

Hildegard was willing to relocate to Rupertsberg near Bingen where another monastery would be built to accommodate the excess nuns. Abbot Kuno of Disibodenberg did not allow Hildegard and her fellow nuns to do so. After a protracted row with the Abbot, finally, she overcame all the difficulties.

With 50 nuns accompanying her, she reached Rupertsberg near Bingen on the left bank of the Rhine. The place was situated at a distance of 15 miles from Disibodenberg. Upon receipt of necessary permission from Count Bernard of Hildesheim, the owner of the area, she constructed a new monastery designed directly under her supervision. The original monastery's construction completed in 1150.

Due to Saint Hildegard's charismatic presence, this new monastery saw an increased influx of nuns within no time. In 1165, Hildegard founded another monastery in Eibingen, 8 miles apart from the monastery at Rupertsberg.

The Visions And Her Religious Scriptures

Saint Hildegard kept mum about her visions during her early childhood. Later, she confided about her visions to Jutta, the Mother Superior. She is said to have experienced “The Shade of the Living Light” at the early age of three.

By the age of five, she realized that she is experiencing visions. In her later years, she was said to have received an instruction from the God to write and record about her such visions.

She described her visions in her first theological text, Scivias (“Know the Ways”). Assisted by a monk, she recorded her 26 visions in this book along with a treatise on the relationship between God and humanity and the redemption.

Apart from her divine qualities, Saint Hildegard was also a gifted composer and poet. In a unique collection titled ‘Symphonia Harmonie celestial revelation,’ she recorded 77 of her lyrical poems each with musical notations composed by her. She possessed incredible medicinal knowledge and could cure seriously ill persons with her extraordinary healing process.

On September 17, 1179, Hildegard went for her heavenly abode. In 1940, the Vatican recognized her work and acknowledged her by declaring her as a Saint.