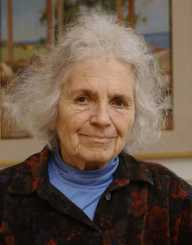 American short-story writer Grace Paley was born Grace Goodside on the 11 December 1922 a Ukrainian Jewish family in the Bronx, New York. Her father was a medical doctor, and the family spoke English, Russian and Yiddish at home.

Grace Paley was a pupil at Evander Child’s High School, Hunter College (1938-1939) and New York University. She did not graduate from New York University but in the early 1940s studied under WH Auden at the New School of Social Research.

Initially, Grace Paley wrote poetry, but after her marriage, she decided to write about women and their experiences, drawing on local women in her area. She submitted her short stories to various publications in the United States but found that they were often rejected. In 1959, her first collection of short stories, When The Little Disturbances of Man, was published and was met with success.

She was encouraged to write a novel and attempted one but realised that she preferred the short story genre. She published two more collections: Enormous Changes at the Last Minute (1974) and Later the Same Day (1985). Apart from her short story writing, Paley taught writing at Sarah Lawrence College, Columbia University, Syracuse and the City College of New York.

Grace Paley was also a political activist who was involved with various organisations including the Women’s Pentagon Action, the Greenwich Village Peace Center, the War Resisters League, and the Feminist Press. Her poetry collections are Leaning Forward (1985) and Begin Again: New and Collected Poems (1992). The Collected Stories were published in 1994, and in 1998 Just as I Thought, a collection of speeches and essays came out.

Grace Paley was elected to the National Academy of Arts and Letters in 1980, in 1983 she was presented with the Edith Wharton Award and in 1993 and 1993, received the REA Award.

Grace Paley married Jess Paley, a cameraman, in 1942 and they had two children. They later divorced, and she married Robert Nichols in 1972. Grace Paley died of breast cancer on the 22 August 2007.