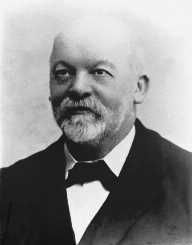 German inventor Gottlieb Wilhelm Daimler took birth on 17th March 1834 in the town of Schorndorf, Germany. The son of baker Johannes Daimler and his wife Frederika, Gottlieb started school in Lateinschule. In the year 1847, when he was just 13 years old, Gottlieb completed his primary education, within a short span of only six years.

Daimler's father wanted him to be a municipal employee, but Daimler had other ambitions. His deep interest in engineering led him to take up an apprenticeship as a gunsmith under the guidance of Master Gunsmith Hermann Raithel. He graduated in the year 1852, and the same year he enrolled himself at Stuttgart's School for Advanced Training in the Industrial Arts to study mechanical engineering.

Gottlieb Daimler, with the assistance of his mentor, Ferdinand von Steinbeis, bagged his first job opportunity at Rollé und Schwilque (R&S) in Grafenstaden. His performance at 'the factory college' was impressive and earned him the position of foreman when R&S started making locomotives. However, Gottlieb preferred to opt for higher studies at 'Stuttgart’s Polytechnic Institute' and gain an in-depth knowledge of steam locomotives thereby enhancing his engineering skills.

In 1861, Gottlieb Daimler was convinced that the future of steam locomotives was bright. He resigned from R&S and traveled to England. Back in those days, England was regarded as the 'motherland of technology.' He spent a brief period at Gorton, Manchester at the Beyer, Peacock, and Company.

Daimler's career took off in the year 1869 when he joined 'Maschinenbau-Gesellschaft Karlsruhe,' a company that manufactured locomotives and railway wagons. Shortly after that, in the year 1872, Daimler was appointed as the technical director at Nikolas Otto's firm 'Gasmotoren-FabrikDeutz.'

Nikolas Otto was recognized worldwide for his invention of the four-stroke internal combustion engine. It was during this period, Gottlieb Daimler came in close contact with Wilhelm Maybach, who turned into a life-long friend and a close aide.

However, within a year, Daimler left the company due to the clash of thoughts with the management and moved to Canstatt where his friend Maybach soon joined him. They set up a shop and started working together.

By the end of 1883, Daimler and Maybach had engineered engines that were powered by gasoline. They planned to use these high-speed internal combustion engines in different types of locomotives.

A breakthrough came in their career with the invention of the 'grandfather clock,' an engine that had the potential to power riding cars as well as boats. In 1885, the duo developed a 'carburetor' and patented their enormously successful 'Daimler-Maybach engines.'

Gottlieb Daimler also built the first motorcycle in the world in 1885 which he had named as 'reitwagen.' In 1889, the joint efforts of Daimler and Maybach culminated in the production of the four-stroke engine, and this led to the launch of the first automobile with four-speed transmission system.

Riding high on their success, the duo established their own company 'Daimler-Motoren-Gesellschaft' (DMG) in the year 1890. In 1896, the company engineered its first truck. Four years later, in 1899, the company fabricated the first ever Mercedes. The name 'Mercedes' was coined after the name of the daughter of the financier who had provided funds to Daimler.

In 1926, long after the death of Gottlieb Daimler, 'Daimler-Motoren-Gesellschaft' entered into a partnership with the 'Benz company' in Germany and thus ‘Daimler-Benz AG' was formed.

Gottlieb Daimler's first wife was Emma Kunz who passed away after 20 years of enjoying marital bliss. The couple had two sons together named Adolf and Paul. At the end of 1880's, Daimler traveled to Florence for treatment of his heart disease. It was during this trip, Daimler met Lina Hartmann who later became his second wife. The auto pioneer died on 6th March 1900 due to a failing heart.