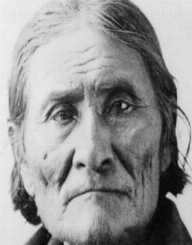 Geronimo was a famous leader who belonged to the South-western Native American tribe called Apache. He hailed from the Bedonkohe band. He was at the centre of the Apache-United States conflict which raged on for most of the second half of the 19th century. For a prolonged period of over 35 years, Geronimo assembled other bands of the Chiricahua Apache viz. the Tchihende, the Tsokanende, and the Nednhi and put up a strong resistance against the American and Spanish invasions on their home territories in the Southwest. He also occasionally carried out successful incursions and raids to thwart the enemy. Geronimo was known for his incredible leadership, skilful warfare tactics, and unabashed brutality which was fuelled by the drive to avenge his family’s murder.

The Legend of Geronimo

Geronimo, by birth, belonged to the Bedonkohe band but he grew up with the Tchihende band after his father’s death. Typical of all Apaches, Geronimo had a large family of three brothers and four sisters.

Geronimo married very early at the age of 17. At that time, the Apache-Mexican conflict was at its peak, provoked by the bounty that the Mexicans placed on Apache scalps in 1835. In one of such incursions led by Colonel Jose Maria Carrasco, Geronimo’s entire family including his mother, wife, and children were killed. Geronimo was not present at the time when the surprise attack took place on the Apache camp. Thus, he harboured immense hate for all Mexicans for the rest of his life, and anecdotes of him brutally butchering random Mexicans are common in the folklore. Geronimo hated Mexicans more than the Americans. Incidentally, his mad skills with a knife against the modern gun-equipped Mexican soldiers led to this strange moniker of his. Geronimo showed no signs of fear, as he went on a crazy rampage with his archaic weapon against a barrage of Mexican bullets and still managed to come out on top.

Under the tribal chief Mangas Coloradas, the Apaches grew into a fearsome force conducting numerous raids on Mexican villages with the death roll crossing 5000 in a span of 15 years. When Geronimo became the leader, the Mexican conflict merged into the Apache-United States war. Geronimo fought against both the Mexicans and the Americans. They would raid in ‘breakouts’ and to avoid getting caught, cross the Mexico-America border frequently, plundering and looting villages, ranches, wagon trains, etc. on either side.

In 1873, the Apaches signed a peace treaty with the Mexicans but were betrayed overnight, when the latter treated the Native Americans with mescal, a distilled alcoholic drink, got them inebriated, and killed them. Ten years later, Mexico opened the border for America to send in the latter's troops in order to capture Geronimo and other Apache bands. Two years later, Geronimo along with other Apache leaders, including Mangus, the son of Mangas Coloradas, protested vehemently against the San Carlos Reservation system and subsequently fled. The Americans deployed more troops, and under the command of General George Crook, they remained in hot pursuit of Geronimo for several months before finally capturing him in the early months of 1886.

Geronimo was known for his extraordinary feats of escape from captivity. Despite agreeing to the terms of surrender, he fled with his followers after suspecting Crook’s intention. Crook was wilfully dismissed by General Philip Sheridan, and it was his replacement General Nelson Miles who finally got Geronimo to surrender after an inexorable pursuit.

As a prisoner of war, Geronimo became a showpiece item for the Americans. After numerous transfers from one fort to another, Geronimo and other Chiricahuas were finally given plots of land where they made a fresh start. The legends surrounding the exploits of Geronimo fascinated everyone; his savage way of life and tales of sadistic and ruthless killings made him an icon of terror. Money-minded people quickly realized it, and soon Geronimo was touring the country appearing in a number of expositions and fairs. He made good money out of this too, selling hats and buttons. Geronimo was a part of the inauguration brigade of President Teddy Roosevelt. But the President later denied his request of the Apaches’ release as prisoners of war and subsequent return to their homeland.

Geronimo married a total of nine times. His first wife named Alope was murdered by the Mexican troops in a surprise attack in 1858. His last wife’s name was Azul. Geronimo had three children from two of his wives. In 1905, the Apache leader published his autobiography titled Geronimo, My Life: The Autobiography of Geronimo where among many interesting details he revealed that after becoming a prisoner of war, he had adopted Christianity. Geronimo died on February 17, 1909, days after falling from a horse and developing pneumonia, as he laid unattended the whole night in the bitter cold until he was found the next day.