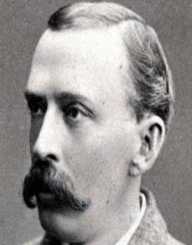 George Frost Kennan was born 16th February 1904, to Kossuth and Florence Kennan. He was born in Milwaukee, Wisconsin, in the United States. His father was a lawyer, but his mother died shortly after his birth due to a burst appendix. Although Kennan was close to his older sisters, he was not at all close to his father or step-mother.

When he was eight years old, George F.Kennan went to Germany for a time to stay with his step-mother so that he could learn German.

He studied at St. John’s Military Academy in Wisconsin, and then went on to Princeton University in 1921. Kennan was shy and introverted, so he didn’t have much of social life on campus. In 1925, he graduated with his bachelor’s degree in History.

George F.Kennan thought he might apply to law school, but decided it was too expensive. He applied to the United States Foreign Service instead, which had only been running for a short while. Kennan passed the entrance examination and spent the next seven months studying at the Foreign Service School in Washington. Kennan’s first job after his study was Vice Consul in Geneva, Switzerland. In under a year, he was appointed to a post in Hamburg, Germany.

In 1928, George F.Kennan thought he might leave the Foreign Service to go back to college. However, he was chosen for a training program in linguistics, so he was able to do three years of study at a graduate level without having to leave the Service. In 1929, Kennan started his studies in history, culture, politics and the Russian language at the Oriental Institute, University of Berlin.

In 1931, George F.Kennan was based in Latvia, as Third Secretary. He worked on Soviet economic affairs, and he became very experienced in Russian affairs. After the election of President Franklin D. Roosevelt, in 1933 the U.S. began formal diplomatic dealings with the Soviets. When Ambassador William C. Bullitt visited Moscow, Kennan accompanied him.

By the mid-1930s, George F.Kennan was considered one of the Russian experts on the staff of the embassy in Moscow. The other experts were Charles E. Bohlen and Loy W. Henderson. The men didn’t believe there was a basis on which to cooperate with the Soviet Union. During this period, Kennan studied Stalin’s Great Purge, and this affected him for the rest of his life.

Joseph E. Davies took over from Bullitt as the Ambassador to the Soviet Union, and as he believed Stalin had done the right thing with the Great Purge and defended other aspects of Stalin’s rule, Kennan was in strong disagreement with him. At one stage, Davies even suggested Kennan be transferred away from Moscow for his health.

George F.Kennan considered leaving the Foreign Service, but instead, he accepted an appointment of the Russian desk at the State Department in Washington. In 1938, Kennan once again headed to Europe, this time to take up a post in Prague. When the Czechoslovak Republic was occupied by Nazi Germany at the start of World War II, Kennan was transferred to Berlin.

Kennan endorsed the Lend-Lease policy, which was an Act that enabled allies of the U.S. to access food, oil and other supplies including warships and planes, from the U.S., with the goal of being able to defeat Germany, Japan, and Italy. Countries like China and the UK took the aid, and, later, so did the Soviet Union and free France, and other Allied nations. Kennan made it clear there must be no endorsement of the Soviets because he didn’t believe them worthy as an ally of the States.

Germany declared war on the United States in 1941, and in 1942, George F.Kennan was transferred to Lisbon, Portugal, where he worked as a counselor. In January 1944, he was reassigned to London. While in London, he worked as a counselor to the American delegation to the European Advisory Commission, which worked on Allied policy in Europe.

Kennan was becoming increasingly disgruntled, feeling that his qualifications were being overlooked, but within a short space of time, he was transferred to Moscow where he was appointed Deputy Chief of the Mission. He tried to persuade policymakers in Washington, along with the President, Harry S. Truman, to work on a sphere of influence policy in Europe rather than pursue diplomatic relations with the Soviets, but his requests fell on deaf ears.

George F.Kennan stayed in the position until April 1946. Around that time, the Treasury Department requested an explanation from the State Department as to why the Soviets behaved the way they did in matters such as not wanting to endorse the International Monetary Fund or the World Bank. Kennan saw this as his opportunity, and he sent a 5,500-word telegram to James Byrnes, Secretary of State, which became known as “the long telegram.” He outlined his alternative strategy for diplomatic relations with the Soviet Union.

His telegram came to the attention of James Forrestal, Secretary of the Navy, who held similar views where the Soviets were concerned. Forrestal used his influence to get Kennan back to Washington, where he was appointed Deputy for Foreign Affairs at the National War College. In July 1947, Kennan published his article called “X” in the Foreign Affairs magazine. He explained Soviet culture and conduct about Stalin and Stalin’s policy, and then expressed his strategy of containing the Soviet Union and withdrawing all U.S. troops from Europe so the Soviets would not feel threatened.

A lot of debate ensured over Kennan’s article, and for many years afterwards, he had to keep explaining his stance. George F.Kennan had become a celebrity overnight, and now had a reputation for his expert commentary. In 1947 under the influence of George C. Marshall, Secretary of State, Kennan established the Policy Planning Staff, which was the internal think tank of the State Department.

After Marshall, Dean Acheson became Secretary of State, and Kennan’s influence decreased at a rapid rate, as Acheson and Truman moved policy in a different direction. Kennan resigned as Director of Policy Planning in December 1949 but stayed until June 1950, at which time he accepted an appointment as Visitor to the Institute for Advanced Study by Robert Oppenheimer, the Director of the Institute.

In December 1951, George F.Kennan was appointed United States Ambassador to the USSR. To his dismay, he was closely shadowed by Soviet officials and discouraged from speaking to everyday Russians. In September 1952, Kennan commented that his conditions in Moscow were much like his period of internment in Berlin after World War II broke out. Kennan lost his post as Ambassador.

Kennan returned to Washington to work for President Eisenhower’s administration. He had many disagreements with Secretary of State, John Foster Dulles, but apart from that, he worked well with the new administration. In 1953, he was asked by the President to manage a series of secret projects about the Soviet Union, as Eisenhower was aligned with Truman’s policies.

When John F. Kennedy’s presidential campaign was underway in 1960, George F.Kennan wrote to him making suggestions on how he felt foreign affairs could be improved. Although he had not been earmarked for a position on the new administration, Kennedy offered him the job of Ambassador in either Poland or Yugoslavia.

Kennan accepted the position in Yugoslavia and transferred in May 1961. His goal was to encourage Yugoslavia and other Eastern bloc countries to move away from the Soviets. Unfortunately for Kennan, the Yugoslav government was suspicious that the Kennedy government would create anti-Yugoslav policy while he was in office.

In 1962, the U.S. legislated to stop financial aid to Yugoslavia and withdrew the sale of spare parts for the Yugoslav warplanes. George F.Kennan strongly protested the legislation, and while Kennedy agreed with Kennan in private, publicly he wouldn’t say anything as he only had a very slim majority and didn’t want to upset the status quo. U.S.-Yugoslav relations continued to deteriorate, and Kennan resigned his position in July 1963.

After his resignation, Kennan spent the rest of his life as an academic. He became a major realist critic of U.S. foreign policy. He had been a student at the Institute for Advanced Study between 1950 and 1952, and he joined the faculty of the Institute’s School of Historical Studies in 1956. During his time at the Institute, Kennan wrote 17 books, along with many articles.

George F.Kennan received many awards and honors, some of which include:

In 1931, George F.Kennan married Annelise Sorensen. The couple had four children together.

He was described as “the most influential diplomat of the 20th century” by Foreign Policy. He was also lauded by the likes of Colin Powell and Henry Kissinger.