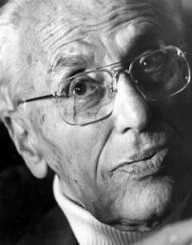 George Cukor is best known for his work behind the camera of many iconic films.  George Cukor directed award-winning movies including A Star is Born, My Fair Lady, and Romeo and Juliet.

George Cukor was born on July 7, 1899, in New York City, New York.  His parents, Viktor and Helen, were Hungarian Jewish immigrants.  Viktor was an attorney who worked his way to the assistant district attorney.

Young George enjoyed the theater and acting.  In his youth, George Cukor took dance lessons and had performed in some of the amateur plays.

George Cukor attended DeWitt Clinton High School, but would often skip some of his high school classes and go to the movie theater instead.

George Cukor graduated in 1917  When George Cukor enrolled in the City College of New  York, it was his father's expectation that he would study law.  With World War I still going on overseas, George Cukor entered the Students Army Training Corps in 1918.  When his military duty was finished, George Cukor left school to work in the entertainment business.

By the 1920s, George Cukor was directing his shows.  His first Broadway debut was “Antonia” by the Hungarian playwright Melchior Lengyel.  George Cukor did a stage adaptation of The Great Gatsby in 1926 which got his noticed by the critics.  George Cukor moved to Hollywood in 1929 at the same time that talking films were starting out.

George Cukor had to prove himself in a new directing genre, so it wasn't until 1931 when George Cukor was able to direct on his own.  The film was called Tarnished Lady.  In 1932, George Cukor directed Katharine Hepburn for the first time.

Their film A Bill of Divorcement was successful as were later films they did together such as Little Women, Sylvia Scarlett, and Holiday.  George Cukor was supposed to direct Gone with the Wind, but he was replaced. George Cukor and Hepburn came together again in the 1940s in The Philadelphia Story.  That decade had some flops as well as successes.

In 1954, George Cukor directed his first Technicolor film and musical with Judy Garland.  It was a remake of the film A Star is Born.  Garland was nominated for the Best Actress Oscar for her role. Another Oscar-worthy film was his 1964 direction of My Fair Lady.  After that film, no other film seemed to be as successful.  The last film he directed was Rich and Famous in 1981.

George Cukor was in a relationship with his partner George Towers since the 1950s.  They stayed together until his death, though Towers married a woman.  Cukor died on January 24, 1983, at the age of 83.

George Cukor was a homosexual.  It is said that his lifestyle was part of the reason that he was turned down for the director role in Gone with the Wind.

George Cukor often had many parties at his home for his homosexual friends to the point that he was in charge of the gay subculture in Hollywood.