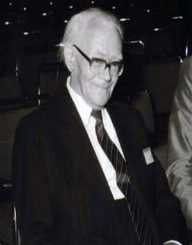 Georg Wittig was born on June 16, 1897, in Berlin, Germany. His family moved to Kassel shortly after his birth, where his father worked as a professor at the applied arts high school. Wittig attended school there and in 1916 went to study at the University of Tübingen. Shortly after, Wittig was drafted in the cavalry of Hesse-Kassel and became a lieutenant. From 1918 until 1919 he was a war prisoner and afterward found it hard to restart his studies since the universities were overcrowded. He was desperate to continue his studies and made a direct appeal to Karl von Auwers, the professor of organic chemistry at the University of Marburg, to allow him to study. He graduated in 1926, and three years later, received a Ph.D. in organic chemistry.

His professor von Auwers convinced Georg Wittig to start an academic career. After earning his Ph.D., Wittig became habilitated and started to lecture at the University. During this time, he also became close friends with Karl Ziegler, who later won the Nobel Prize in Chemistry. By this time, Wittig had already written his 400-page book on stereochemistry.

In 1931, Georg Wittig was invited by Karl Fries to become a professor at the TU Braunschweig- the oldest technical university in Germany. He accepted the position and started to work there in 1932. At the time, the Nazis were increasing their power and the political situation brought on problems for the academic personal. Fries was a strict oppose of the Nazis. Therefore they wanted to get rid of him. Wittig showed solidarity with his colleague and, which caused him to fear for his job.

Fries eventually was forced to retire, and Georg Wittig was offered a position at the University of Freiburg. Hermann Staudinger, who knew Wittig from his book on stereochemistry, in which he supported Staudinger’s highly criticized theory of macromolecules. Wittig began working in Freiburg in 1937. During his time at the University, the foundations of carbanion chemistry were laid. In 1944, Wittig became the head of the organic chemistry department at the University of Tübingen, succeeding Wilhelm Schlenk. During his time there, Wittig did most of his scientific work, including the development of Wittig reaction. After the World War II ended, he established a very active group of young scientists. He had very high standards for his students and was highly respected by them. Wittig inspired many of his students to pursue an academic career.

Georg Wittig is mostly known for the discovery of the Wittig reaction. He discovered that the reaction between aldehyde or ketone and triphenyl phosphonium ylide fives an alkene and triphenylphosphine oxide. The reaction is widely used in organic synthesis for the preparation of alkenes. He also discovered the 1,2 Wittig rearrangement, a categorization of chemical reactions in organic chemistry. Wittig is also credited with the discovery of the 2,3 Wittig rearrangement- the transformation of allylic ether into homoallylic alcohol via concerted, pericyclic process.

In 1956, Georg Wittig was appointed as the head of organic chemistry department at the University of Heidelberg. He was leading the newly built department and worked at the university after his retirement in 1967, publishing papers until 1980. He was awarded an honorary doctorate of the Sorbonne in 1956. In 1979, Wittig and Herbert C. Brown jointly won the Nobel Prize in Chemistry “for the development of the use of boron- and phosphorus-containing compounds, respectively, into important reagents in organic synthesis.”

Georg Wittig married in 1931 to Waltraud Erns. She was working in von Auwer’s group when they met. She was a major supporter of her husband’s work and held a doctorate herself. The couple had three daughters and remained together until her death in 1978.

Georg Wittig lived a long life, but during his last years, his health weakened. He remained active in his field; publishing works until 1980. Wittig died in 1987, just a few weeks before his 90th birthday.