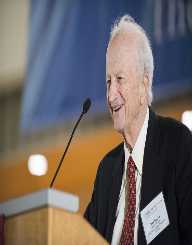 Economist Gary Becker was born on the 2 December 1930 in Pottsville, Pennsylvania.

When Becker was five, his family moved to Brooklyn NYC. He had a brother Marvin and two sisters, Natalie and Wendy. His father was from Montreal, Canada, and his mother came from an Eastern European background. His father lost his sight, and Becker used to read financial reports to him. He once said that it may have stimulated his interest in economics but that it bored him at the time.

Becker did his schooling in Brooklyn. During his school years, he was a keen sportsman. After high school, he enrolled at Princeton University and was awarded a BA (1951), and he then did his doctorate at the University of Chicago (1955). His thesis was The Economics of Racial Discrimination. Becker showed that discrimination could be costly for all concerned. It was at Chicago University that he did Milton Friedman’s course on microeconomics. Becker had started to get bored with economics, and Friedman’s course reignited his interest in the subject.

Becker became an Assistant Professor at the University of Chicago and carried on with his research, doing some teaching at the same time. He spent three years at the University of Chicago. In 1957 he published a book based on his Ph.D. dissertation on racial discrimination and economics. The book was well reviewed, but most other economists, sociologist, and psychologists were hostile to the idea of the economics of discrimination and did not think Becker had anything to contribute to academic fields outside economics. His colleagues at Chicago University, including Milton Friedman, felt the book was outstanding, and this support gave him the confidence to carry on with his work.

In 1957 Becker took up a position at the National Bureau of Economic Research where he divided his time between his research at the Bureau and teaching at Columbia University. He spent twelve years doing this. During this time he published his book on human capital. Becker was also publishing articles on crime and punishment, the allocation of time and the economics of irrational behavior. He even started a workshop on labor economics working with Jacob Mincer who became co-director of the studio.

Becker returned to the University of Chicago in 1970 and started working with George Stigler. It was around the time that Becker began to work on the economics of family life relating to thing like birth rates, family sizes, marriage. In 1981 he published A Treatise on the Family based on this research, with an expanded version released in 1991.

Becker was offered a joint appointment in the Sociology Department at Chicago University in 1983, and he worked with James Coleman to provide an interdisciplinary faculty seminar on rational choice in the social sciences.

In 1985 Business Week magazine asked him to write a monthly column.

Richard A Posner and Becker started a blog in 2004. Posts included debate on whether marijuana should be decriminalized, lifting the trade embargo with Cuba, the efficiency of bureaucracies, immigration, and income distribution.

In 2010, Becker gave the Hayek Memorial Lecture at the Institute of Economic Affairs in London and discussed the question of immigration. He said that an open border policy was impossible in welfare states and instead suggested that idea that a market approach was needed, i.e., charging immigrated an entry fee; with loans to migrants unable to afford the costs involved in settling in the United Kingdom.

Becker was in favor of delaying the payment of retirement benefits and in 2011, said that given the United State's massive budget deficits, it was necessary to consider raising the retirement age to 70.

During Arnold Schwarzenegger’s tenure as governor of California, Becker was one of his economic advisers.

Becker was the recipient of the John Bates Clark Medal in 1967. This medal is presented annually to what is considered to be the most outstanding economist under age 40 and is rated on a par with the Nobel Prize for economics. He was president of a member of the American Economic Association in 1987 and continued as a member throughout his career. Becker was also a Fellow of the Americal Statistical Association, the American Academy of Arts and Sciences and the Econometric Society. He also was given the Seidman Award and the first social science Award of Merit from the National Institute of Health.

Becker was awarded the Nobel Prize in Economics in 1992, the National Medal of Science in 2000 and the Presidential Medal of Honor in 2007.

Chicago University awarded him the Alumni’s Medal in 2010. And in 2011, the university announced that they were naming a research institute in honor of Gary Becker and Milton Friedman, Becker’s mentor and colleague: The Becker Friedman Institute for Research in Economics.

Becker married Doria Slote in 1954, and the couple had two daughters, Judy and Catherine. His first wife died in 1970, and ten years later Becker married academic Guity Nashat whom he met when they haggled over the price of a piece of furniture he was selling.

Gary S. Becker died on 3 May 2014 from complications resulting from an operation for an ulcer. He was 83 years old.

Regarded as one of the most important economists of the 20th century with his groundbreaking approach to social economics, the economics of discrimination and family issues. Becker is one of the most cited economists. He was one of the first economists to focus on applying economic principles and ideas to all areas of life, especially from a sociological point of view.

Becker was visionary in his approach to social economics including his theories including the idea that education could be viewed as an investment and he coined the phrase human capital. In the beginning, his work was disliked or ignored by many economists.

Gary Becker came under criticism for his economic modeling relating to the scarcity of organs about transplants. The general feeling was that putting a price on a human body would lead to exploitation of the poor.