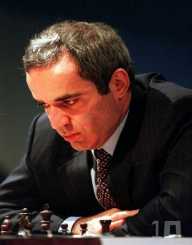 Garry Kasparov is an Azerbaijan born Russian chess grandmaster, he is best known for his world championship wins and his matches against the IBM computer program Deep Blue.

Garry Kasparov was born in Baku, the Soviet Union on 13 April 1963 as Garik Kimovich Weinstein. Kim Moiseyevich Weinstein, his father, was Russian Jewish and Klara Shagenovna Gasparian, his mother, was from Armenia. Kasparov declared that he was a Christian, but had little interest in religion. His father died when Kasparov was just seven years old, and he adopted the Russian version of his mother’s surname, Kasparov.

His first interaction with chess was a written problem which he solved. Garry Kasparov began training at the school of the chess grandmaster, Mikhail Botvinnik, at age ten. Kasparov won the Soviet Junior Chess Championship in 1976 and 1977. At age fifteen Kasparov earned the title chess master. It was this success that convinced to make chess his career. That same year Kasparov became the youngest ever player to qualify for the Soviet Chess Championship.

In 1979, Garry Kasparov competed in a grandmaster contest in Yugoslavia and won, this launched him from being unranked by the World Chess Federation to number fifteen in the world. He won the Junior World Championship in 1980, emerging triumphant at the Dortmund tournament.

Garry Kasparov was already well established as a chess player by the time he turned eighteen. Kasparov competed for the Soviet Union at the Chess Olympiad in Malta in 1980 and  held the chess grandmaster title. The next year he tied for first place at the Soviet Chess Championship. In 1982, Kasparov competed at the Candidates Tournament, a tournament to decide who will face the World Chess Federation (FIDE) champion.

Kasparov was still a teenager, 19 at the time of the tournament, this made him the youngest player since the fifteen-year-old Bobby Fisher competed. Kasparov was ranked number two in the world by the FIDE. His shot at the World Championship was nearly destroyed by politics when the Soviet Union refused to let him play his semi-final opponent, Soviet defector Viktor Korchnoi.

Korchnoi agreed to a rearranged match in London and was defeated by Garry Kasparov. The victory made the number one ranked player in the world and the youngest number one in history, the record was later broken by fellow Russian Vladimir Kramnik and is now held by Norway’s Magnus Carlsen. Kasparov went on to win the Candidates Tournament by defeating Vasily Smyslov. He would soon face world champion Anatoly Karpov in the 1984 Chess World Championship. The match broke records for length and as the first and only no-decision World Championship match.

Kasparov quickly fell behind four nil behind Karpov in the first to six wins match. Kasparov managed a series of draws before losing another game. Again he drew a series of games before winning three games, but the match was declared over by FIDE president Florencio Campomanes, who said he did so for the sake of the players’ health. The match had lasted 48 games beating the previous record by 14 games.

The match was rearranged on a best of 24 points arrangement and held in Moscow. Garry Kasparov emerged victorious in the final game securing a 13-11 victory. At 22 he was the youngest ever World Champion. The two would rematch in 1986 with twelve games being played in London and twelve in Leningrad. Kasparov defended his title winning 12 ½ to 11 1/2.

Karpov showed his talent by qualifying through the Candidates tournament to play Kasparov again in 1987, only the second player to ever achieve this feat. The match ended 12 all, and Kasparov retained the title. The fifth match in 1990 saw Kasparov again emerge victorious 12 ½ to 11 ½. Kasparov began organizing other chess organizations in opposition to the FIDE. He founded a players union the Grandmaster Association and organized a World Cup.

In 1993, Garry Kasparov played his title defense match against Britain’s Nigel Short outside FIDE jurisdiction to earn greater sponsorship revenue. Both players were ejected from the FIDE and chess suffered a schism. The schism lasted thirteen years as Kasparov created the Professional Chess Association and remained its champion while Karpov became the FIDE’s champion once again.

Kasparov lost his world title in 2000 as his former student Vladimir Kramnik defeated him without losing a game. Despite the loss, Kasparov remained the world number one and repeatedly tried to get a match against the FIDE’s champions, but none of the matches could secure funding and Kasparov announced his retirement from competitive chess in 2005. Kasparov played some exhibitions after his retirement often playing thirty players or more at the same time. He also coached some grandmasters such as Magnus Carlsen, Viswanathan Anand, and Hikaru Nakamura.

Garry Kasparov played thirty-two different computers simultaneously in 1985 and defeated them all. In 1989, he faced the IBM computer Deep Thought which he beat two nil. Kasparov met the IBM computer Deep Blue in 1996 and 1997. He defeated it four two in 1996 but was defeated 2 ½ to 3 ½ in 1997. It was the first time that a computer beat a world champion. Kasparov stated the match was unfair as he could not study the form of his opponent as it could his. Kasparov would draw with two more chess-playing computers in 2003.

Garry Kasparov joined the Communist Party as it was mandatory. He left again in 1990 as communism collapsed and Azerbaijan began rounding up ethnic Armenians and Kasparov, and his mother had to flee Baku. Kasparov was involved in the creation of the Democratic Party of Russia. Following his retirement from chess Kasparov became even more politically engaged. He has been a vocal critic of Vladimir Putin and founded the United Civil Front as a social movement to try and protect the democratic process.

He was also involved in The Other Russia coalition of groups which oppose Putin’s rule. Kasparov continued to take part in protests and attempted to run against Putin in the 2007 presidential election. However, Kasparov and several protestors were repeatedly banned from assembling and arrested.

Kasparov was beaten by police after the trial of the members of Pussy Riot, which Kasparov had attended. Garry Kasparov continues to condemn the Putin regime and has been outspoken on the Syrian Civil War, the annexation of the Crimea and the Sochi Winter Olympics. He became a citizen of Croatia in 2014 as Russia had become an unsafe place for him to live.

Garry Kasparov wrote some books telling his life story, on the history of chess and on the threat Vladimir Putin poses to the world. He wrote and released his autobiography shortly after his World Championship win, and it has repeatedly been updated. He also wrote My Great Predecessors about previous great chess champions. In 2016, he released Winter is Coming, which is about the threat Putin poses.

Garry Kasparov was married three times and has four children. He had a daughter with his first wife, Masha. He had a son with his second wife, Yulia. His current wife and Kasparov have two children together.