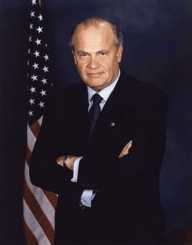 Freddie Dalton Thompson was born 19th August 1942, to Fletcher and Ruth Thompson. He was born in Sheffield, Alabama, in the United States. His father was a car salesman.

Thompson studied at Lawrence County High School, and after graduation, enrolled at Florence State College (now known as the University of North Alabama). After transferring to Memphis State University, he graduated in 1964, with a double degree in philosophy and political science.

He received scholarship offers to Tulane and Vanderbilt law schools. He decided on Vanderbilt Law School, and in 1967, graduated with a law degree.

In 1972, he became the campaign manager for the re-election campaign of Howard Baker, a Republican U.S. Senator.

In 1973, Thompson became part of the counsel that helped the Republican senators on the Senate Watergate Committee, investigate the Watergate scandal. Some of Thompson’s questions and actions were instrumental in the downfall of President Nixon.

In 1977, Thompson represented Marie Ragghianti in a high-profile case against Democratic Governor Ray Blanton. Ragghianti was Chair of the Tennessee Parole Board, and she had refused to release felons who had bribed aides from the Governor’s office in exchange for clemency.

Thompson won the case for Ragghianti, who received a payout for back pay, and was also reinstated to her position.

He continued his legal work through the 1980s and worked as a lobbyist as well.

In 1994, Thompson was elected the U.S. Senate, to finish the two years remaining on Al Gore’s Senate term. In 1996, he was re-elected. He was a member of the Committee on Governmental Affairs and served on the Finance Committee, the Intelligence Committee, and the National Security Working Group.

Thompson had made clear his intention not to run for re-election in 2002, as he didn’t want a long-term career in the Senate. He endorsed John McCain in the Republican presidential primaries and was considered a potential running mate with McCain.

Thompson was only known to have one more client that he lobbied for after leaving the Senate in 2003. He took on a campaign for Equitas Ltd and received $760,000 between 2004 and 2006 in relation to asbestos claims.

Although working as a lawyer and Senator, Thompson also took up acting. The case where he represented Marie Ragghianti was turned into a book, followed by a movie, and Thompson was offered the part of himself, which he accepted.

In 2002, Thompson became the head of the Federal City Council. Based in Washington, D.C., they were a group of business and civic leaders wanting economic development for the city. He held the position until 2005.

Thompson performed other duties for the President, and until July 2007 was also the Chair of the International Security Advisory Board, reporting to the Secretary of State on strategic threats as they came to light.

He stepped back from acting in 2007 to concentrate on becoming the Republican nomination for president in the 2008 election but dropped out of the race in early 2008.

Between 2006 and 2007, Thompson took on radio commitments and a writing commitment with a magazine, but in 2009, he returned to acting.

In 1959, Thompson married Sarah Elizabeth Lindsey. They had three children together but divorced in 1985. Thompson married for a second time in 2002, to Jeri Kehn. The couple had two children

In 2004, Thompson was diagnosed with non-Hodgkin’s lymphoma. In 2007 he announced he was in remission, but on 1st November 2015, he died from a recurrence of the disease.