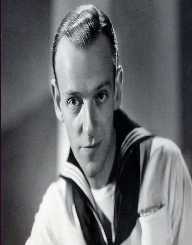 Fred Astaire was an American stage dancer and actor. He is best known for musical comedy films

Fred Astaire was born Frederick Austerlitz, on May 10, 1899, in Omaha, Nebraska. He was born to Johanna "Ann" and Frederic "Fritz" Austerlitz. He had an older sister named Adele, who was also a talented dancer and singer. It was their mother Ann who had planned the sibling’s act, which was common in vaudeville during that era. Fred learned piano, accordion, and clarinet, as well as dancing at the age of four, with his sister.

When their father lost his job, the family moved to New York City in 1905, enrolling the children at the Alviene Master School of the Theatre and Academy of Cultural Arts. Ann changed their names to Astaire, following an uncle with surname L’Astaire. In school, they learned dancing, speaking and singing. Their first act was Juvenile Artists Presenting an Electric Musical Toe-Dancing Novelty. When Fred was ten, he and Adele made a first professional appearance, in vaudeville, in a Keyport, N.J., theater as Brother-Sister Team.

When Fred was fourteen in 1916, he met George Gershwin, who was a song plugger for Jerome H. Remick's music publishing company. Together, they found new music and dance steps. In 1917, the siblings broke into Broadway with Over the Top. Even though the show was not a hit, the siblings showed promise and were immediately booked into ''The Passing Show of 1918.’

After eleven musicals in Broadway starting with George and Ira Gershwin's Funny Face in 1927. Fred also went to Hollywood for a screen test at Paramount Pictures but was deemed unsuitable for films. In 1937, the Brother-Sister Team danced their last hit “The Band Wagon.”

Adele Astaire married Lord Charles Cavendish, second son of the 9th Duke of Devonshire. Fred Astaire found a new partner in Claire Luce. Together, they starred in Cole Porter's ''Gay Divorce'' -  later filmed as ''The Gay Divorcee'' in 1932. It was his last stage musical, as he was approved by David O. Selznick of RKO Pictures.

Fred’s mother was Lutheran German, while his father was Jewish converted to Roman Catholicism. In 1912, Fred Astaire became an Episcopalian.

After signing with RKO Pictures, Fred Astaire debuted in Dancing Lady in 1933, produced by MGM, featuring Joan Crawford and Clark Gable. Later, he was matched up with Ginger Rogers, for Flying Down to Rio, in the same year. The Astaire-Rogers pairing was appealing to viewers, and they appeared in more films together, including The Gay Divorcee and Top Hat. The Astaire-Rogers pairing had nine films together,

From 1940, Fred continued making films with other partners such as Rita Hayworth, Cyd Charisse, Judy Garland, Leslie Caron and Audrey Hepburn. He choreographed and planned dances and musicals. Although the films that he produced received a lukewarm response. In 1946, he announced his retirement during the production of Blue Skies, nominating "Putting on the Ritz" as his farewell dance.

Fred Astaire concentrated on his horse-racing interests after retirement. He founded the Fred Astaire Dance Studios in 1947 but sold it in 1966.

In 1948, Fred unretired himself to replace an injured actor in Easter Parade. In 1949, he again starred with Ginger Rogers in The Barkleys of Broadway. From 1953 to 1957, Fred Astaire’s films struggled to make money, even though they were well received. He took a break from dance filming after Silk Stockings in 1957. He had made 30 musical films in 25 years when he took the break.

From 1959, Fred had his first nondancing role, playing Julian Osborne, in the movie On the Beach. Fred Astaire's last major musical film was Finian's Rainbow in 1968, where he played an Irish rogue. Petula Clark, who played the skeptical daughter was his partner. He also co-starred with other actors in television special A Family Upside Down in 1978. His final film role was Ghost Story in 1981.

Aside from dancing and films, Fred Astaire also sang songs for the show, including duet. Fred also wrote songs, such as "It's Just Like Taking Candy from a Baby." He wrote his own autobiography “Steps in Time,'' published in 1959.

Fred Astaire married Phyllis Potter (formerly Livingston Baker) in 1933. She was a former wife of Eliphalet Nott Potter III. Fred was devastated when she died at the age of 46 in 1955 when he was filming Daddy Long Legs. Phyllis Potter had a son Eliphalet IV (Peter) from her first marriage, and the couple had two children: Fred Jr and Ava Astaire. He remarried at the age of 81 to Robyn Smith, a jockey who was 45 years younger.

Fred was also golf and Thoroughbred horse racing enthusiast. His horse Triplicate won the Hollywood Gold Cup and San Juan Capistrano Handicap in 1946, during his retirement.

Fred Astaire died of pneumonia on June 22, 1987, in Los Angeles, California. He was interred in the Oakwood Memorial Park Cemetery in Chatsworth, California.

American Film Institute awarded Fred Astaire the ninth Life Achievement Award. He had an honorary Oscar in 1949 for his musical contributions, as he was not an actor. Fred also had an Emmy and a Golden Globe award.