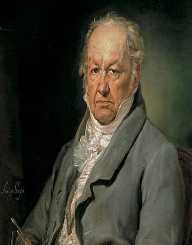 As there are ranks in every career, Francisco Goya would have been considered a General if he was in the army. However, he found himself in painting and made which made him the most revered Spanish painter of his time. Born on March 30, 1746, Francisco Goya found himself with a long career being a romantic painter, printmaker, commentator, and chronicler. With most of his works done in the late 18th century and the early 19th century, Francisco Goya was termed as last of the Old Masters and first of the modern. Francisco Goya was very successful as a painter and his works on portraits were extraordinary.

Francisco Goya was born on March 30, 1746, to Jose Benito de Goya Franque and Gracia de Lucientes y Salvador in Fuendetodos, Aragon, Spain. Francisco Goya was the fourth of six children by his parents. The family later moved from Aragon to Zaragoza where they had bought a new home. Though records of his childhood days are rear, Francisco Goya is believed to have attended Escuelas Pias de San Anton where he learned reading, writing, numeracy and basic knowledge in classics.

Francisco Goya learned how to paint at age 14 under the tutelage of Jose Luzan y Martinez where he copied stamps for four years. In 1760, Francisco Goya decided to work on his own, so Francisco Goya wrote the letter “paint from my invention” and left for Madrid. Whiles there, Francisco Goya had the zeal to perfect his painting skills, so studied under Raphael Mengs a famous painter with Spanish royalty. Understudying Mengs, Francisco Goya had some fracas on because he was not doing well in his exams. The then tried to enter the Real Academia de Bella Arts de Dan Fernando but failed on two occasions in 1763 and 1766.

After the two failed attempts, Francisco Goya decided to enter Rome which at the time was the cultural capital of Europe. Rome also had a very composed way of keeping all samples of its antiques in a way it is easily referred to in future. Much is not known about his stay there but at least two of his paintings, Sacrifice to Vesta and a Sacrifice to Pan was done there in 1771. Before he left Italy, he partook in a painting competition in Parma where Francisco Goya won the second prize. He left for Zaragoza in 1771.

His return to Zaragoza was met with a painting job. Francisco Goya took part in the in the painting of the domes of the Basilica of the Pillar including Adoration of the Name of God. Other works include painting for the monastic church of the Charterhouse of Aula Dei and also for the Sobradiel Palace. As a learner, Francisco Goya studied artist Francisco Bayeu Subias, and that had a positive impact on his subsequent paintings. In 1773 he married Francisco’s sister which strengthened their friendship. With his help, Francisco Goya was commissioned to produce tapestry cartoons for the Royal Tapestry Factory in 1777 in Madrid. Most of his works at the time were used to decorate the stone walls of the Spanish monarchs’ residences, El Escorial and Palacio Real del Pardo. In 1779, his work on The Garrotted Man had since become the largest he ever produced

Francisco Goya also worked on the altar of the Church of San Francisco El Grande which would later gain him a membership to the Royal Academy of Fine Arts. Francisco Goya continued with his artistic works until his health began to fail him at a point in time. Despite that, he continued painting by adopting a style which was informal and personal which he later found to be limiting. The new format restricted him from capturing complex colors and did not correspond to his impasto and glazing techniques he was used to at the time.

In his new position, Francisco Goya painted the king, queen and other members of the royal family as well as Manuel de Godoy, the Spanish Prime Minister, and other notable people.". Goyagot deaf in 1793 from an undiagnosed illness and gradually became reserved and redrew himself from society. This in a way affected his painting works which became darker and bleak. The new twist in turns also depicted a bleak outlook on personal, social and political levels at the time. In 1795, Francisco Goya was appointed Director of the Royal Academy. Francisco Goya did several other works for Godoy including the victory in the brief War of the Oranges against Portugal painting, his 1801 portrait and also commissioned La Maja Desnuda in the late 1790s. La Maja Desnuda is considered "the first totally profane life-size female nude in Western art.

In 1799 Francisco Goya commenced a series of paintings he named Caprichos and depicted what he said was "the innumerable foibles and follies to be found in any civilized society, and from the common prejudices and deceitful practices which custom, ignorance, or self-interest have made usual."His illness had a negative impact on his paintings as it affected his balance. After the Peninsular war, which lasted from 1808 to 1814 Francisco Goya was believed to been involved with the French because he did some painting works with French patrons and sympathizers. This resulted in animosity between the Spanish King, Ferdinand VII and Goya after his restoration in 1814. That time, Francisco Goya did some painting on the war, The Second of May 1808 and The Third of May 1808 and was working on The Disaster of War in 1814.

Francisco Goya did portraits of the King for some organization but never presented him one because of their bad relationship. Francisco Goya did several works on commissioned basis including the Santa Justa and Santa Rufina for the Cathedral of Seville, La Tauromaquia and Los Disparates between 1814 and 1819. After the death of his wife, he was taken care of by Leocadia Wiess, a distant relative at his Quinta del Sordo villa. Within that time, his painting The Milkmaid of Bordeaux in 1925 to 1827 is considered to be Leocadia Weiss.

Francisco Goya got married to Josefa Bayeu in 1773 and had their first child, Antonio Juan Ramon Carlos in 1774. His wife died in 1812. It was believed that he had a relationship with Leocadia Wiess who was his caretaker.