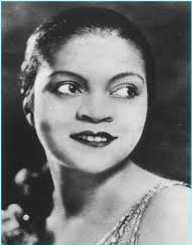 Florence Winfrey was born 25th January 1896, to John and Nellie Winfrey. She was born in Washington, D.C., in the United States, and was the youngest of three girls. The three sisters sang together when they were children, and as they grew older, they formed a group called the Mills Sisters, and successfully performed vaudeville. They travelled and performed along the east coast of America.

Although Mills and her sisters were successful, the other two girls soon tired of the performing and finished, but Florence Mills wanted a career on the stage. She formed a quartet called, the Panama Four with three other girls. They were mildly successful, but in 1917, Mills left the group and joined the Tennessee Ten, which was a traveling black show.

Ulysses “Slow Kid” Thompson was the acrobatic dancer as well as the dance director of the troupe, and he would later become Florence Mills' husband.

Mills was cast in a role for the Broadway production, Shuffle Along, in 1921. Her popularity quickly grew, and she toured through Europe and Britain with the production, winning over the press with her performances. A white promotor by the name of Lew Leslie employed Mills and Thompson to perform nightly at the Plantation Club once the production of Shuffle Along had finished. Many black artists performed at his club along with Mills and Thompson.

He turned the performances from his nightclub into a Broadway production called, The Plantation Revue. The Revue was then taken to London by another promoter, Charles B. Cochran. In 1923, Cochran produced another show called Dover Street to Dixie, and Mills performed in the black section of the cast.

In 1926, Florence Mills was in Lew Leslie’s Blackbirds, which made her an international star, with rave revues throughout Europe when she toured there. Throughout her life, Mills was a strong advocate for equal rights for African-Americans.

In 1921, Florence Mills married Ulysses “Slow Kid” Thompson. The couple was still together at the time of her death in 1927. Mills died on 1st November 1927, at the age of 31. Having performed in the Blackbirds show over 300 times, she was exhausted and run-down, and contracted tuberculosis.

Mills had over 10,000 people pay their respects to her at the funeral home, and she had many thousands more attend her funeral.

Florence Mills had several songs written in her honor, and a biography called, Florence Mills: Harlem: Jazz Queen was published in 2006 by Bill Egan. Mills also has a residential building in the Harlem district named in her honor.