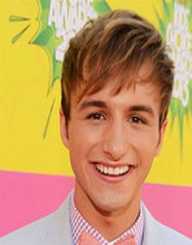 Finn Harries is a social media celebrity out of England. He has over 4.1 million subscribers on his YouTube channel.

Finn Harries was born on May 13, 1993, in London, England. His full name at birth was Finnegan Frayn Harries.

His twin brother Jack shares his brother's talent. His parents Andy and Rebecca are involved in entertainment, particularly film and productions.  Even his grandfather was a playwright while his grandmother was a journalist.

Finn Harries started attending Leeds in 2012 studying graphic design. He dropped out to meet the demand of JacksGap. Later he attended Parson School of Design in New York City to study architecture.

When Finn Harries and his brother Jack were 18, they started a YouTube channel about travel. It began as a video diary to chronicle their adventures during their gap year. JacksGap started in 2011 and had since reached more than four million subscribers. While Jack is the presenter of the videos, Finn works most of the business end.

Finn Harries was the one who determined the branding and logo. The revenue from the YouTube channel helped pay for their travels as well as their university costs. However, both brothers dropped out in the first few months to focus on JacksGap.

Upon the return to JacksGap, both Harries and brother Jack started the production company Digital Native Studios. They continued to earn revenue from YouTube click-throughs, but they also received sponsorships from companies such as Skype and Sony Entertainment.

Their documentary from their trip to India titled “The Rickshaw Run” had almost two million views for each of the four parts.

Finn Harries has been seen with a girlfriend, but also tries to focus on his studies and his passion for the environment.

From an early age, Finn Harries has always been concerned about the environment and how he could help protect it. He often calls out to his young social media followers to plan and carry out different ways to tackle climate change or save the planet.

Finn Harries is also a supporter and board member of The School Fund. The charity helps children from developing countries by funding their education.  Harries' role was to use his skills in marketing to support this organization. This included promotional videos in Kenya and Tanzania.