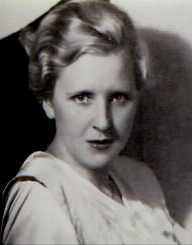 The Lady Love of the Dreaded Dictator: Eva Braun

Eva Anna Paula Braun, the long-time companion of Adolf Hitler, was born on February 6, 1912, in Munich, Germany. She was the middle child among the three daughters born to Friedrich ‘Fritz’ Braun, a school teacher and Franziska ‘Fanny’ Kronberger, who worked as a seamstress before her marriage. Born in a middle-class family, Eva behaved like a typical teenager, happy with her interest and attention towards toys, boys, makeup, and clothes during her early years.

Eva Braun received her elementary education at a Catholic lyceum in Munich. Later, she enrolled herself at the Convent of the English Sisters, a business school in Simbach am Inn. She was a mediocre student with average grades and showed some promising talent as an athlete.

Upon completion of her education, Eva Braun went to work initially as a shop assistant, bookkeeper, and saleswoman at the shop of Heinrich Hoffman, who was, at that time, the official photographer for the Nazi Party (NSDAP). She learnt to use a camera and the technique of developing photos very soon. Eva met the Nazi chief Adolf Hitler for the first time while working at the Hoffman’s studio in October 1929. Hitler was 23 years senior to Eva. He was introduced to Eva as "Herr Wolff."

Hitler had a live-in relationship with his half-niece Geli Raubal, with whom he shared an apartment at Prinzregentenplatz 16 in Munich since 1929. Raubal was found dead on September 18, 1931, at this apartment with a gunshot wound inflicted on her apparently by herself with a pistol owned by Hitler. At the time of her death, Hitler was at Nuremberg, and the apparent suicide by his lady love was an emotional blow to him.

The unfortunate demise of Raubal drew Hitler and Eva Braun close together, and the frequency of their meetings increased considerably. In August 1932, Eva made a vain attempt on her life trying to shoot herself in the chest using her father’s pistol. The effort was feeble, and Eva was saved. Hitler began giving more attention to her after the failed suicide attempt and became a committed lover to her by the end of 1932.

Eva Braun was still associated with Heinrich Hoffman, and as time passed by, she picked up the essentials of becoming a good photographer. She started accompanying Hoffman as his assistant with Hitler’s entourage party in their capacity as the official photographer of the National Socialist German Workers Party (Nazi Party) by 1933.

Hitler was most of the time preoccupied and busy in developing his Nazi Party and the works related to it and was unable to devote much time to her. Aggrieved, Eva Braun made a suicide attempt for the second time consuming an overdose of sleeping pills. She survived this attempt too, and as a sort of compensation for his physical non-availability, Hitler provided her a three-room apartment in Munich soon after that. Both Eva and her sister Gretl lived together in that apartment. Hitler also offered her a villa in Bogenhausen at Wasserburgerstr the following year.

Over the years, Eva Braun and Hitler developed a comfortable and cozy live-in relationship between them. Eva mostly stayed in Munich and also visited Hitler’s household at the Berghof near Berchtesgaden, whenever Hitler came to rest there. However, their relationship was kept a secret, and they never appeared in public as a couple. During the Nuremberg Rally of 1935, Eva Braun attended the rally for the first time as a member of the Hoffman’s staff. She did not influence any of Hitler’s political decisions. Hitler chose her as a companion because he was aware that she would not pose any challenge to his authority.

In the initial days of the World War II, Eva Braun was not much bothered about the developments and spent most of her time in activities such as gymnastics, swimming, sunbathing and skiing. Once the Axis powers were cornered and started facing defeat, retreating to their backyard, she started feeling the heat and became irritated, anxious and nervous. At the height of World War II, Eva had the opportunity to disassociate herself from Hitler. However, she preferred to remain loyal to the feared leader.

In the final days of the war, Eva Braun joined Hitler at his Bunker in Berlin. They planned to kill themselves to evade getting captured live by the enemy forces. As a final gesture towards commemorating the love they shared, both of them agreed to marry each other before finally ending their lives. On April 29, 1945, the couple tied the nuptial knot. They committed suicide the following day, on April 30, 1945. Eva ended her life by consuming poison (she bit a cyanide capsule) and Hitler shot himself in the temple besides drinking poison too.

The bodies of Hitler and Eva were burned by the members of Hitler’s inner circle. Hitler’s dentist Hugo Blaschke later identified the remains of Hitler and Eva after inspecting their dental remains. The Soviets initially buried the charred remains of their body at the SMERSH compound in Magdeburg, East Germany. On April 4, 1970, the Soviet KGB team exhumed five wooden boxes including Hitler and Eva Braun. The boxes were thoroughly crushed and burned, and the remaining ashes were thrown into the Biederitz River, a tributary of the river Elbe.

Eva Braun was an epitome of love during her lifetime. She could have saved herself by leaving Hitler during the final days of the war. However, she chose to do the contrary. The rest of her family survived the war. Her mother died in January 1976 at the age of 96. She lived her final days in an old farmhouse in Ruhpolding, Bavaria. Her father passed away earlier in 1964. Her sister Gretl gave birth to a daughter on May 5, 1945, barely days after her suicide and named her Eva. Gretl married a businessman called Kurt Beringhoff afterwards. She died in 1987.