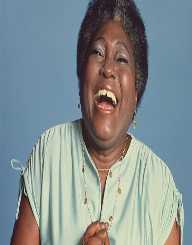 American actress Esther Rolle was born on the 8 November 1920 in Pompano Beach, Florida to an immigrant couple, Jonathan and Elizabeth Rolle, who were from The Bahamas. She was one of eighteen children born to the couple. Her father was a vegetable farmer, and she was raised on a 10-acre farm in Florida. Two of her sisters were also actors.

Esther Rolle graduated from high school then relocated to New York City to pursue a career in acting. In the late 1950s, she was a member of Sogola Obola, an African-American dance troupe. Rolle then joined Federal Theater African Dance Troupe and became the director in the early 1960s. In 1962 she made her theatre debut in New York in the play The Blacks. She continued appearing in various productions. Rolle had a small part in To Kill A Mockingbird (1962) and appeared in Nothing But A Man (1964) and The Learning Tree (1969).

During the 1970s Esther Rolle rose to prominence playing housekeeper, Florida Evans, in the famous sitcom Maude (1972-1978), which starred Bea Arthur. Her role in Maude led to a spin-off series Good Times (1976-1977).  She also starred in Summer of My German Soldier for which for she won an Emmy. During the 1970s Rolle made guest appearances on various television shows including The Incredible Hulk (1979), Love Boat (1983) and Murder She Wrote (1985) and A Raisin in the Sun (1989).

Esther Rolle was the first woman to be the recipient of the NAACP’s Civil Rights Leadership Award. In 1991 she was inducted into the Black Filmmakers Hall of Fame. Rolle was nominated for a 1975 Golden Globe: Best TV Actress - Comedy or Musical for Good Times (1974). And in 1979 for she a Primetime Emmy: Outstanding Supporting Actress in a Limited Series or Special award for Summer of My German Soldier (1978).

Between 1955 and 1975 Esther Rolle was married to Oscar Robinson.The couple had two children.

Esther Rolle died on the 17 November 1998 from complication s due to diabetes. She was on a kidney dialysis machine for the last two months of her life.