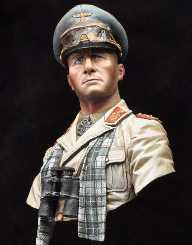 World War II German General Erwin Rommel, who became known as The Desert Fox, was born on the 15 November 1891. He was born in Heidenheim An der Brenz, Germany to Erwin Rommel Snr. And Helen Von Luz. The family had five children: Erwin, Gerhard, Karl, and Helen as well as Manfred who died in infancy.

Erwin Rommel became an officer cadet with the 124 Wurttemberg Infantry Regiment in 1910, graduating in 1911. He was then made a battery commander in the 46th Field Artillery Regiment and served in France during World War I (1914-1918).

Because of his skill as a tactician, Erwin Rommel quickly rose through the ranks and at the outbreak of World War II in 1939 he was made a General Major. The following year Rommel was put in command of the German Army 7th Panzer Division. His 21st Panzer Division defeated the British Commonwealth Forces in North Africa in 1941, and it was around this time that he became known as The Desert Fox. Throughout World War II, Rommel continued winning crucial battles in Africa and later Italy,  including the Battle of Alamein and the Battle of Gazala.

Erwin Rommel won many awards and medals during his military career. As a young officer, he won the Military Merit of Order of Wurtemberg for his participation in World War I. He received the 2nd Class Iron Cross (1914), the 1st Class Iron Cross (1915) and the prestigious Pour Le Merite (1917). During World War II, Rommel was awarded the 1st and 2nd Class Clasp to the Iron Cross. He also was presented with the Knight’s Cross of the Iron Cross for his role as Commander of the 7th Panzer Division (1940). In 1941 he received the Oak Leaves, in 1942 the Swords, the Italian Gold Medal of Military Valor and the Italian Knight of the Colonial Order of the Star. In 1943, Rommel was awarded the Diamonds for his role as Commander in Chief o the Army Group Afrika.

It was Germany’s North African Campaign (1941-1943) which made Rommel’s name as a tactician. Initially, Erwin Rommel was commanded to take a small force and assist the Axis powers in North Africa after British troops had defeated the Italians. He arrived in Tripoli in early 1941 and held off the Allied skills for two years. Rommel’s most significant battle was defeating the British at the Battle of Gazala in May 1942. He then took Tobruk. Later that year, at the Battle of El Alamein, British forces under Montgomery defeated the Germans. The German troops then withdrew to Tunisia and left Europe in March of 1943. Rommel’s final military post, in 1944, was as commander of the Army Group B which covered northwest Europe.

By the closing stages of World War II, Rommel was disillusioned with Hitler, and he was preparing to surrender his forces to the Allies. Then he was wounded in an air attack in mid-1944 and sent back home for treatment. He was subsequently accused of plotting to kill Hitler, accused of high treason and offered a trial or suicide. Rommel chose death. Erwin Rommel died by biting a cyanide capsule on the 14 October 1944.

In 1916 Erwin Rommel married Lucia Maria Mollin (b.1894-d.1971), and the couple had one child, a son Manfred. Manfred was 15 when his father died. He later became the Mayor of Stuttgart (1974-1996). As a liberal, he was a supporter of the Jewish population, immigrant rights, and civil liberties.

Erwin Rommel also had a child by Walburga Stemmer, a daughter Gertrude (b.1913).