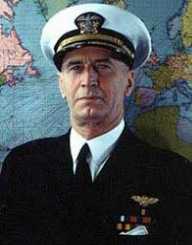 Ernest J. King is an American war veteran who has served in the Spanish-American War, World War I, and  World War II. He authored a biography entitled Fleet Admiral King: A Naval Record which was published in 1952 during his later years.

Ernest J. King was married to Baltimore aristocrat named Martha "Mattie" Rankin Egerton. He met Egerton while he was attending the Naval Academy then ultimately married on October 10. 1905 in a ceremony that was held at the Naval Academy Chapel. The couple had seven children together comprised of six daughters, namely Claire, Elizabeth, Florence, Martha, Eleanor, Mildred, and finally a son named Ernest Joseph King, Jr.

Born as Ernest Joseph King on November 23, 1878, in Lorain, Ohio, he was the son of Elizabeth Keam and James Clydesdale King. As a child, he was exceptionally bright, so it came as no surprise when he graduated from Lorrain High School at the top of his class in 1897. Upon graduating, he enrolled at the United States Naval Academy and attained the topmost ranking at the time on his senior year: midshipman lieutenant commander.

While attending the Naval Academy, he got to experience first-hand serving as a Naval sailor when he served during the Spanish-American War on the cruiser USS San Francisco. King graduated ranked fourth in his class in 1901.

Already having his first on-hand experience, Ernest J. King served as a junior officer on many surveys, cruiser, and battleships upon graduation such as the USS Eagle, the USS Illinois, the USS Alabama, the USS Hampshire, and the USS Cincinnati. His first command was in 1914 where he was responsible for the destroyer USS Terry which took part in the American occupation of Veracruz.

During World War I, he came under the service of Atlantic Fleet's Commander in Chief, Vice Admiral Henry T. Mayo. While in the Fleet, he spent a lot of time alongside the Royal Navy from which he developed an Anglophobia without an apparent reason. He was also awarded for the first time during this service where he received the Navy Cross for his service as the Atlantic Fleet's assistant chief of staff.

Before World War II officially broke out, Ernest J. King experienced handling submarines for two years from 1923 until 1925. Before handling them, he had undergone a short training course in London at the newly erected Naval Submarine Base where he eventually took command of in 1923.

A year after ending his term of command at the submarine subdivision in 1926, Ernest J. King was asked by then-Chief of the Bureau of Aeronautics ' Rear Admiral William A. Moffett if he would consider transferring to naval aviation which he promptly accepted. King took command of the aircraft USS Wright and at the same time served as senior staff aide of Commander at the Atlantic Fleet,  and the Air Squadrons.

The same year, the United States implemented a new law stating that commanders of aviation and aircraft carriers should be qualified naval aviation observes and aviators. In line with this, Ernest J. King attended the Naval Air Station Pensacola in Florida to undergo training a year later in 1927. Shortly after, he graduated the course the same year and earned his wings, therefore assuming command once again of the USS Wright.

King retired from active duty on December 15, 1945, but was still considered as an officer of the Navy. Upon retiring, he resided in Washington D.C. and served in the Naval Historical Foundation as its president for 3 years from 1946 until 1949. In 1950, he served as an advisor to the Secretary of the Navy, but due to his declining health, he was unfit to work for the long term. King suffered from a fatal heart attack at the age of 77 while in Kittery, Maine on June 25, 1956. He was later buried in Annapolis, Maryland at the United States Naval Academy and was joined by his wife upon her death in 1969.