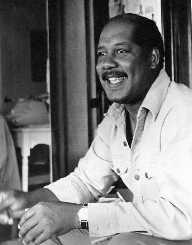 Ernest J. Gaines was born on the 15 January 1933 in Oscar, Pointe Coupee Parish, Louisiana on the River Lake Plantation. The place of his birth was the plantation that his ancestors had lived on since the days of slavery. His parents divorced when he was a child and his aunt Augusteen Jefferson helped raise him and his siblings.

Ernest J. Gaines did his early education at a plantation church in Oscar, Louisiana. Because there were no high schools available for African American citizens in Oscar, Gaines attended a segregated Catholic school, St Augustine’s School in New Roads, Louisiana.

At the age of fifteen, Gaines relocated to Vallejo in California where his mother and his stepfather were working. Around this time he became interested in literature and started writing fiction based on his own life.

His first published short story was The Turtles, which appeared in the San Francisco State University’s magazine.

Ernest J. Gaines graduated from San Francisco State University with a degree in literature in 1957. Gaines was then enlisted in the U.S. Army, spending two years doing military service before returning to studying. He had won a place in a graduate creative writing course at Stanford University which was run by Wallace Stegner (b.1903-d.1993).

After graduating Ernest J. Gaines did various jobs to support himself while concentrating on building his writing career. In 1964, his first novel, Catherine Carmier was published. The book received favorable reviews but did not sell well. He continued writing, winning a fair number of rejections before his second novel, Of Love and Dust (1967)  was published. A short story collection, Bloodline, came out in 1968.

Then in 1971, Gaines found international fame with his novel The Autobiography of Miss Jane Pittman. The story centered around a 110-year-old woman who had been born into slavery.

The novel was adapted for television, and the film won nine Emmy Awards.

Gaines won a Guggenheim Foundation Fellowship and continued writing. Other work includes My Father’s House (1978), A Gathering of Old Men (1983) and  A Lesson Before Dying. The latter focused on capital punishment and a man wrongly sentenced to death.  This book was another international success which was adapted for television in 1999 and won an Emmy Award for Best Film for Television that year.

Ernest J. Gaines has won many awards and accolades including the National Humanities Medal of the United States and a Chevalier of France’s Order of Arts and Letters. He was a MacArthur Foundation fellow. And In 2007 the Ernest J. Gaines Award for Literary Excellence was established by the Baton Rouge Foundation.

Other awards include the National Endowment for the Arts grant (1967). National Book Critics Circle Award for Fiction (1993). The Louisiana Writer Award (2000). The Governor’s Arts Award (2000). American Academy of Arts and Letters Department of Blacks (2000). Academy of Achievement Golden Plate Award (2001). The Sidney Lanier Prize for Southern Literature (2012) and the National Medal of Arts (2013).

Ernest J. Gaines married Dianne Saulney, and they have homes in Louisiana and San Francisco. The couple built a house on the original plantation where Gaines’s ancestors had been slaves and later crop workers over the course of five generations. They also had the church he worshipped in as a child moved to their property.