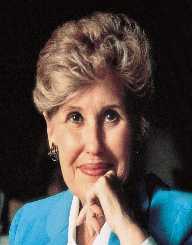 Popular American humorist Erma Louise Bombeck, best-known for her witty syndicated columns written for many newspapers and magazines, was born on February 21, 1927. Her place of birth is Bellbrook, Ohio, United States of America. Her father, Cassius Edwin Fiste's profession was that of a crane operator. She was raised in Dayton by her elder paternal half-sister, Thelma. Erma began her elementary schooling in 1932. She moved to her grandmother's house along with her mother after the unfortunate and premature death of her father in 1936. Eventually, her mother remarried in 1938. Erma practiced and learned singing and tap dancing during her childhood. A local radio station engaged her to perform revue for children. She continued the act for eight long years.

She attended the Emerson Junior High School in the early 1940s. The school used to publish a newspaper of its own titled ‘The Owl’. She started writing a satirical column in that newspaper while studying there. In 1942, Erma joined Patterson (formerly Parker) Vocational High School. There too she began writing a rather serious column in the school newspaper. She used to punch some humor in it in her own characteristic inimitable style. In the same year, she also started working as a copy-girl in the local Dayton Herald newspaper. In 1943, famous American child actress Shirley Temple visited Dayton. Erma interviewed Temple which turned out to be her first major journalistic assignment. Shortly afterward, the Dayton Herald newspaper featured this interview.

Upon completion of her high school studies in 1944, she started doing different types of odd jobs. She engaged herself in works like typing, stenography and small journalistic tasks in Dayton Herald and in various other organizations. In 1946, she entered Ohio University, Athens, Ohio with the help of the money she earned doing all those odd jobs. However, she could not compete with the standard of the university. Therefore, the university newspaper blatantly refused to publish her literary contributions. As she ran out of money she left the university after only one semester. However, the failure did not deter her spirits. She soon joined the University of Dayton.

Erma continued her role as a part-time worker, engaging herself with several types of jobs including column writing for newspapers, PR work in local YMCA and the work of termite control accountant in an advertising agency. She also became a regular contributor for the university student publication ‘The exponent’. In 1949, Erma earned her graduation from the university with a degree in English.

She returned to join the Journal-Herald (previously known as Dayton Herald) newspaper upon her graduation. This time she started contributing to the newspaper’s women’s section as well. She became a full-time housewife after her marriage in 1953. However, she continued to write her satirical regular columns in the Dayton Shopping News. After spending a decade catering to the needs of motherhood, Erma came back to where she belonged in 1964.

She initially worked for the Kettering-Oakwood Times writing in its weekly columns. After a while, she began writing two weekly humorous columns for the Dayton Journal Herald. The articles went national only after three weeks through the Newsday Newspaper Syndicate. Erma used to write three weekly columns titled "At Wit's End" which was published through the system of national syndication. Initially, these articles catered to 36 major American newspapers. The success of her syndicated columns led her writing career to an upward graph. Soon, she began contributing to various other literary journals including Reader’s Digest, Good Housekeeping Magazine, Redbook, Family Circle, and teen magazines as well. By 1978, her columns regularly appeared in around 900 newspapers.

Besides her journalistic and column writing works, she also authored several best-selling books. Prominent among these are ‘I Lost Everything in the Post-Natal Depression’ (1973), ‘If Life is a Bowl of Cherries’, ‘What Am I Doing in the Pits?’ (1978) and her magnum opus work ‘The Grass Is Always Greener over the Septic Tank’ (1976). The Grass is always Greener was later made into a television film.

Erma made a successful career in television as well. She appeared on the ABC news show "Good Morning, America" from 1975 to 1986. She also tried her hand as a writer and producer in her own television series titled ‘Maggie’. However, poor response from the viewers forced the makers to take the show off-air just after eight episodes.

Erma married William Lawrence Bombeck on August 13, 1949. In addition to their one adopted child, the couple also had three children together.

Erma was diagnosed with breast cancer in 1992. Eventually, she had to undergo a surgical operation called mastectomy. However, to her misfortune, she was again diagnosed with polycystic kidney disease. To survive the incurable genetic disorder she went for routine daily dialysis. Her doctors advised her to undergo a kidney transplant operation. She underwent the surgery on April 3, 1996. In a tragic turn of events, she could not cope up with the complications of the surgery and breathed her last on April 22, 1996. With her death, she left a rich legacy of her writings where she excelled in self-deprecating humor in her own characteristic inimitable style.