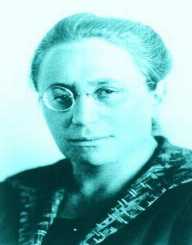 Emmy Noether (1882-1935) was a German mathematician. She is considered to be one of the most important mathematicians of the 20th century. Her work continues to be influential today.

Amalie Emmy Noether was born on March 23, 1882, in Erlangen, Bavaria in what was then the German Empire. Her parents were Max Noether, a well-known mathematician, and Ida Amalia Kaufmann. She was the eldest of their four children and their only daughter.

During her childhood and high school years, Emmy did not concentrate in mathematics. Instead, she studied English and French and became very proficient, and learned to play the piano.

Emmy Noether earned the qualification to teach English and French but instead chose to further her studies. She attended the University of Erlangen to study mathematics at a time when the presence of women as students or professors was not well tolerated. In fact, Noether was one of only two female students, and while they were allowed to audit the classes, they could not fully participate. In 1903 she enrolled at the University of Göttingen, and then returned to the University of Erlangen in 1904, finally allowed to enroll as a student. In 1907 she obtained her Ph.D. in mathematics.

Shortly after graduating, Emmy began working in the Mathematical Institute of Erlangen, where her father taught. She stayed there for seven years, filling in for her father when he was sick and doing research. Noether was not paid for her work during those years.

Afterwards, in 1915, Emmy Noether joined the University of Göttingen. She remained there until 1933, teaching and supervising doctoral students. She was eventually granted a recognized and salaried position.

In 1918, Emmy published Noether’s theorem, which is one of her primary works and has had a significant impact on physics. The 1920s were the period characterized by her tremendous contributions to algebra. In 1921 she published her famous paper titled Theory of Ideals in Ring Domains.

Later on, in 1932, Emmy Noether delivered a plenary lecture at the International Congress of Mathematicians in Zürich. Many regard this as the highest point in her career. That same year she was also awarded the Ackermann-Teubner Memorial Prize for her contributions to mathematics.

Around that time, the Nazi movement was gaining traction in Germany. Noether, being of Jewish descent, became a target for discrimination. In 1933, when Jews were dismissed from German universities, she moved to Bryn Mawr College in Pennsylvania, in the United States. She continued her teaching activities there until her death in 1935.

Emmy Noether never married, and instead dedicated her life to her studies. She became known for her patience and nurturing attitude towards her students, as well as her helpfulness. She shared her ideas freely and even allowed some of her ideas to be published as the work of others.

Emmy Noether died on April 14, 1935, after a surgery to remove an ovarian cyst. Although she had appeared to be recovering well, she died four days after the operation. She was 53 years old at the time. Nowadays, her work continues to be influential, and she is still considered among the most significant mathematicians. There are several memorials dedicated to her, as well as a moon crater (Nöther), and a planet (7001 Noether) named after her.