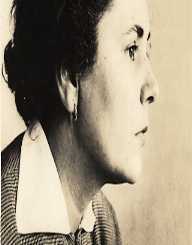 Elizabeth Bishop was born on February 8, 1911, in Worcester, Massachusetts, USA. Her parents were Gertrude (Bulmer) and William Bishop. Sadly, her father died when she was very young, so she never knew him. Later in her childhood, her mother was institutionalized. Because of this, she was raised by her maternal grandparents for a few years and her maternal aunt and uncle ( Maude and George Shepardson) later on in his childhood.

For much of her childhood, Elizabeth Bishop was in poor health. Because of this, she was in and out of school. She was not enrolled in school for a serious length of time until she started high school at  Saugus High School. She later transferred to North Shore Country Day School. After this, she attended the Walnut Hill School for the Arts, a boarding school; she graduated from this school in 1930.

When Elizabeth Bishop first attended college, in the fall of 1930, she enrolled at Vassar University. There, she started out studying music but later changed her major to study writing instead. While at Vassar, she helped to found a literary journal called Con Spirito. Sadly, the journal did not last for long. She graduated from Vassar in 1934. After graduating, she attended the Cornell Medical School. However, she quickly dropped out, choosing to pursue a career in writing instead.

Shortly after graduating from Vassar, in 1935, Elizabeth Bishop left the United States to travel abroad. Her first stop was in France, to stay with a friend, Louise Crane. She lived here for about four years. She then traveled around Europe, visiting countries like Spain and Ireland. After which, she traveled to northern Africa. While traveling, she was inspired by what she saw and wrote poetry on it.

Elizabeth Bishop published her first book, a collection of poems, in 1946. The collection was called North & South. She wrote mostly about the scenery she experienced in her travels, but she did not write much about her personal life. Sometimes, she would put in vague references to her personal experiences at times, but she liked to describe the natural world, plants and animals, more than she liked to write about people.

In the mid to late-1940’s, Elizabeth Bishop did not publish much. Although she had a fairly large inheritance from her father, she still needed other forms of income. At this time, she was not yet a famous author. She applied for several grants and fellowship. The money from these helped her to afford to spend time writing poetry while not needing to take on any other jobs that might distract her from her work.

One of her most famous trips took place in Brazil, where she lived for many years, from 1951 5o 1966. While here, she was constantly inspired by the natural environment of the area. While here, she wrote several poems and republished her book North & South, but gave it a new name and added in her new poems. The book was now called North & South -- A Cold Spring. A few years later, while still in Brazil, she published another book of poems, Questions of Travel. This book also contained one short story: In the Village.

In 1966, Elizabeth Bishop moved back to the United States. Her inheritance money was drying up, and she needed another job aside from writing poetry, as she was still not very famous. While in the USA, she worked at the University of Washington, Seattle, as a writer-in-residence.

After moving back and forth between Brazil and the USA, and facing some personal drama as well, she published her next book in 1969, titled The Complete Poems.

In 1969, Elizabeth Bishop got a job teaching at Harvard University. There, she taught English. She worked there until 1977 when she retired. It was noted that she did not felt comfortable as a teacher, but her students thought she did a great job.

Elizabeth Bishop published her last book of poems in 1976, called Geography III. However, a book of collected poems called The Complete Poems: 1927-1979, was published after her death in 1983.

Although it is not known for sure, it has been suggested that Elizabeth Bishop was gay, which is why she was never married. However, she did live with several women during her life, which she was suspected to have romantic relationships with. Some of the women she was suspected to have been romantically involved with are Louise Crane, Marjorie Carr-Stevens, Alice Methfessel, and Lota de Macedo Soares.

Elizabeth Bishop died on October 6, 1979, in Boston, Massachusetts. The cause of her death was a cerebral aneurysm. She was 68 years old when he passed away.