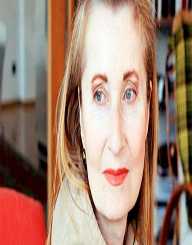 Austrian author Elfriede Jelinek is also a playwright.  The 2004 Nobel Prize winner in Literature is best known for her novel The Piano Teacher.

Elfriede Jelinek was born on October 20, 1946, in Mürzzuschlag, Austria.  Her father Friedrich was a Jewish chemist and her mother Olga Ilona was Roman Catholic personal manager at a company. The family later moved to Vienna.  Her mother encouraged Elfriede Jelinek to take up music lessons with instruments such as organ, piano, guitar, violin, and viola.  Her goal was to have Jelinek become a professional musician.

At the same time, her father survived the Holocaust because of his work while many of his family died.  Elfriede Jelinek often cared for her psychologically ill father.

Elfriede Jelinek graduated from a Roman Catholic school in 1964.  Elfriede Jelinek enrolled in the Vienna Conservatory while also studying at the University of Vienna where she focused on art history and theater.

Elfriede Jelinek graduated with an organist diploma from the conservatory in 1971, but she ceased her studies at the university. Elfriede Jelinek developed an anxiety disorder, dropped out of school, and kept to herself at her parents' home for a year.

The year she spent at home was the year she used writing as therapy.  Elfriede Jelinek wrote her first book of poems titled Lisas Schatten (Lisa's Shadow).  She published the book in 1967.

Elfriede Jelinek's second book was a satirical novel titled Wir sind lockvögel baby (We Are Decoys Baby) in 1970.  Her work focused on her social and political views of the time. In 1974 through 1991, Elfriede Jelinek was a member of Austria's Communist Party.

This aligned with her themes against capitalist consumer society and how people were being used as a commodity.  In the 190s, her focus turned to women's rights and feminism.

Elfriede Jelinek's work is often seen as controversial as is her political activism.  However, Elfriede Jelinek has use female sexuality and the power-play battle of the sexes as themes in her work.  While Elfriede Jelinek has not received as much attention with English-speaking audiences, at least seven of her works have been translated into English.  The bulk of her work has been as a playwright in the German-speaking theater.

Elfriede Jelinek's anxiety disorder includes agoraphobia and social phobia.  It has kept her from going to many places in public including the Nobel Prize award ceremony.

Elfriede Jelinek's work is controversial in some literary circles as some few it as pornographic.