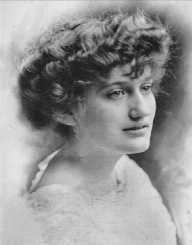 Edith Ewing Bouvier Beale was born on October 5, 1895. She was an American socialite. She was also an amateur singer. She was popularly known for her eccentric lifestyle. She died on February 5, 1977, at the age of eighty-one.

Edith Ewing Bouvier Beale was born on October 5, 1895, in New Jersey in the United States of America. She was born to John Vernou Bouvier Junior and Maude Frances Sergeant.

Her father was an attorney who was appointed Major in the Judge Advocate Corps of the United States Army during World War 1. When Edith was growing up, she loved photography and theatrical arts. She loved physiology hence she dreamt of becoming a surgeon in her youth.

Edith Bouvier Beale started her career as an amateur singer. In 1917, she got married to Phelan Beale who was a lawyer and financier. Her husband worked in a law firm that was owned by her father.

They got married at St. Patrick’s Cathedral in New York. Together they had three children, Edith born in 1917, Phelan Beale born in 1920 and Bouvier Beale born in 1922. In 1923, her husband bought the twenty-eight room Grey Gardens mansion which was in East Hampton close to the Atlantic Ocean. In 1931, the couple separated. Edith Bouvier Beale received child support, but there was no alimony for her.

Edith Bouvier Beale did not give up on her singing career, so she continued pursuing a career in music. She gave recitals at her home and local events. In 1942, her father cut her off her will leaving her only a small trust of sixty-five thousand dollars.

She suffered from depression due to the stress that she was undergoing that she eventually gained weight. In the 1940s, she underwent several eye surgeries to correct her eyesight. In 1946, her husband notified her of their divorce via a telegram from Mexico.

After the divorce, Edith kept the Grey Garden mansion. At the mansion, she lived with two males, her handyman Tom Logan and her accompanist George Strong. In 1952, her daughter returned to live at the mansion with her permanently from Manhattan. In 1969, her niece Jacqueline Kennedy became the first lady of the United States of America.

In 1968, she was stolen from and since then she rarely left the house. The house was so unkempt that there was a time when a documentary was to be shot in the house and this did not happen due to the condition of the mansion. Later on, Edith’s niece Jacqueline Kennedy and Aristotle Onassis donated thirty-two thousand dollars for the house to be cleaned up and renovated.

Edith Bouvier Beale never left her house because she was afraid it would be confiscated by the authorities.  In 1973, Edith and her daughter were each paid five thousand dollars by the Maysles Brothers to appear in a documentary that featured their daily lives. In 1975, the film was screened for them in the upstairs hall of Grey Gardens.

Edith Bouvier Beale died on February 5, 1977, at the age of eighty-one of pneumonia at Southampton Hospital in New York. Her remains were buried in the Bouvier family plot at Most Holy Trinity Catholic Cemetery in East Hampton.