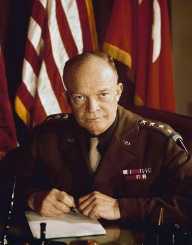 Dwight David “Ike” Eisenhower was born on October 14, 1890, in Denison, Texas, the third of seven sons to his parents David Eisenhower and Ida Elizabeth Eisenhower. His father owned a store in Hope, Kansas, but after the business failed, the family moved to Texas and later back to Kansas. His father then began to work as a mechanic for the railroad. The family moved to Abilene, Kansas in 1892. As a boy, he enjoyed exploring outdoors, hunting, cooking, and card playing.

His mother had an extensive collection of history books, which sparkled Eisenhower’s interest in military history. He attended the Abilene High School and graduated in 1909. During his time in school, Eisenhower got his knee injury and the infection spread to his groin. The infection was life-threatening, and the doctor suggested amputation, however, Eisenhower refused and surprisingly recovered.

Dwight Eisenhower had to repeat his freshman year. He and his brother both wanted to attend college, but could not afford it. They made a pact to attend college in alternate years, while the other one worked to earn tuition.

His brother began studying at college. Meanwhile, Dwight Eisenhower was working at a Creamery. After two years, his friend encouraged Dwight to apply to the Naval Academy, since no tuition was required. He was among the winners of the entrance exam competition but was too old for the Naval Academy. Still, Eisenhower was accepted to West Point in 1911. His performance at the West Point was average, and in his studies, he emphasized engineering, science, and mathematics. Eisenhower graduated in 1915.

After graduating from West Point, Dwight Eisenhower was stationed in Texas. There he met his future wife Mamie Geneva Doud and married her on July 1, 1916. He and his wife often moved to different posts throughout Texas, Georgia, Maryland and Pennsylvania. Their first son was born in 1917, the same year when United States entered World War I. Eisenhower was then appointed to run a tank training center in Gettysburg, Pennsylvania. He continued to rise through the ranks and in 1920 became a major.

In 1921, Eisenhower’s first son died of Scarlet fever. His second son was born in 1922. Eisenhower was offered the role of the executive officer to General Fox Conner in Panama Canal Zone. In 1924, he applied to the Command and General Staff School at Ft. Leavenworth, Kansas. He graduated first in his class in 1926, earning an excellent reputation for his military abilities. For two years, starting 1927, Eisenhower began a tour at the War Department under General John Pershing. He finished touring in 1929 and was appointed chief military aide for General Douglas MacArthur.

In 1935, Dwight Eisenhower began to serve under MacArthur as his assistant military advisor to the Philippines and returned to the United States in 1940.

After returning to the United States, Eisenhower was stationed in Washington, and the following year was transferred to Fort Sam Houston, where he became the chief of staff for the Third Army. He soon became the brigadier general of the Louisiana Maneuvers and was transferred to War Plans Division in Washington, D.C. in 1942, Eisenhower became major general and two months later was promoted to commander in chief of the Allied Forces.

Dwight Eisenhower led the Operation Torch, where the Allies invaded North Africa. On June 6, 1944, known as the D-day, Eisenhower commanded the Normandy invasion. When Germany surrendered in 1945, Eisenhower became the military governor of the U.S. Occupied Zone. Upon his return to the United States, he was appointed the U.S. Army chief of staff.

In 1948, Dwight Eisenhower became the President of Columbia University and held the position until 1950. He left the university to become the Supreme Allied Commander of the North Atlantic Treaty Organization. While he spent his appointment in Paris, Eisenhower was encouraged by his Republican colleagues to run for the presidency of United States. in 1952, he retired from active service and announced his candidacy for the Republican Party nomination. Eisenhower won the election on November 4, 1952.

In 1953, Eisenhower organized the armistice which brought peace to South Korea’s border and made his famous “Atoms for Peace” speech. The speech promoted applying atomic energy to peaceful uses, rather than using it for warfare. In 1956, he was elected for a second term, winning by a wider margin than his first election. During his second term, Eisenhower continued to promote the peaceful use of atomic energy. During this time he was also dealing with crises in Lebanon and Suez.

During his two terms as the President, Eisenhower created the United States Information Agency and established the states of Alaska and Hawaii. He supported the creation of the Interstate Highway System. In 1957, he signed the Civil Rights Act and set up the Civil Rights Commission. He also signed the bill to form the National Aeronautics and Space Administration. Eisenhower left the office in 1961.

After his two terms as the President, Dwight Eisenhower retired to his home in Gettysburg. His successor, President Kennedy reactivated his commission as general, and Eisenhower kept an office at Gettysburg College for the rest of his life.

Eisenhower died on March 28, 1969, after suffering from a long-term heart-related illness.