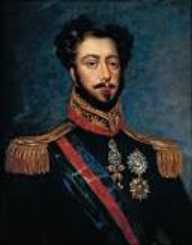 Pedro was born Dom Pedro de Alcântara Cipriano Serafim of the House of Braganza on the 12 October 1798 to Prince Dom Joao, later King João VI of Portugal who reigned from 1816 until 1826. His mother was Dona Carlota Joaquina, the daughter of King Don Carlos IV of Spain. His paternal grandparents were King Dom Pedro III and Queen Dona Maria I of Portugal.

Pedro was the fourth child and second son in the family. When his older brother Francisco Antonio died in 1801, Pedro became his father’s heir and Prince of Beira. His parents' marriage broke down and from 1802, Pedro and his sisters living with their grandmother Maria I in Queluz Palace.

During the Napoleonic Wars, when Napoleon’s troops took control of the Iberian Peninsula, the Portuguese royal family escaped to Brazil with their entourage (1807). The British provided warships as escorts from Portugal to Brazil. After their arrival in Brazil in early January 1808, Pedro’s father established a royal court in exile in Rio de Janeiro.

When Napoleon was defeated in 1815, the Braganza family assumed their position as monarchs of Portugal. At first King Joao VI, ruled from Brazil via a proxy council but returned to Portugal in 1821 because of the Liberal Revolution which had begun in 1820. Pedro stayed on in Brazil as regent.

Pedro had various issues to deal with as Emperor including the province of Cisplatina which separated from Argentina, and he had ongoing difficulties with his chief minister. He was also unpopular in Brazil because of his perceived mistreatment of his wife, who was well-liked by the general population. In 1826, when his father died in Portugal, Pedro became Pedro I of Portugal before abdicating in favour of his daughter Maria who became Queen of Portugal.

To secure her position, Pedro was arranging for her to marry his brother Miguel. But, in 1928, Miguel seized power. Meanwhile, in Brazil after the conflict between Portuguese royalists and Brazilian liberals, Pedro stood down as Emperor of Brazil in early 1931. He appointed his son Pedro as Dom Pedro II and left Brazil for Portugal.

Pedro was actively involved in the conflict which engulfed the Iberian Peninsula between liberals and those wanting to return to absolute rule by monarchists.  Pedro invaded Portugal in 1832 with an army consisting mainly of foreign volunteers, liberals and some Brazilians. Miguel’s army was larger than Pedro’s, and the siege of Porto continued for more than twelve months until Lisbon eventually fell in mid-1833.

Meanwhile, the First Carlist War was being fought in Spain, and Pedro’s army was responsible for keeping Queen Isabella II on the throne of Spain. In 1834, his brother Miguel was sent into exile, and Pedro’s daughter Maria was crowned Queen Maria II of Portugal (1834-1853).

Pedro, I is respected in modern Brazil as the ruler who kept Brazil reunited in the early years. He is also remembered for his abolitionist attitude as well as removing Miguel from the throne of Portugal.

His first wife was Austrian Princess Archduchess Maria Leopoldina. The couple had seven children (m.1817-her death 1826). His second wife was Amelia of Leuchtenberg (m.1829-1834). Pedro died at the age of 35 on the 24 September 1834; he had been suffering from tuberculosis.