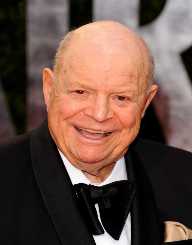 Born on May 8, 1926, Donald Jay Rickles was an American actor and a famous stand-up comedian. Rickles built for himself a strong image in the comic industry becoming well known as an insult comic. Not only was he a renowned comedian, but he also featured in some film and television productions making an acting debut in 1955 as an announcer in Stage 7. Since then, he has appeared in Run Silent Run Deep1958, Beach Blanket Bingo, 1965, The Money Jungle, 1967 and Kelly’s Heroes, 1970. He also starred in the sitcom C.P.O Sharkey, which lasted for two years. Rickles also became a popular guest on talk shows like Late Show with David Letterman and The Tonight Show Starring Johnny Carson. In 2008, he won a Primetime Emmy Award for the documentary Mr. Warmth: The Don Rickles Project.

Donald Jay Rickles was born on May 8, 1926, in Queens to Max Rickles and Etta. His father was a Lithuanian immigrant, and his mother was born to Austrian immigrants in New York City. He was educated at the Newtown High School where he graduated. After his graduation from high school, Rickles was enlisted in the United States Navy where he served as a seaman first class on the motor torpedo boat tender USS Cyrene (AGP-13) during the World War II. In 1946, he was discharged from the service honourably. In 1948 he enrolled at the American Academy of Dramatic Arts to fulfill his dreams of becoming a dramatic actor. While there, he played roles on television.

After graduating from school, Don Rickles found it difficult gaining an acting job and therefore started a career in comedy in clubs in New York, Miami, and Los Angeles. During the early days of into his career, he became well known as the insult comedian because of the way he responded to his heckler. As time went on, his fans became tuned to his insults even more than prepared materials which informed his decision to infuse it into his acts. In between his performances, he would briefly pause and call members of his audience, "hockey pucks."

Don Rickles mentioned Milton Berle comedy style as his source of inspiration in an interview on Larry King Live. As he continued with his club comedy, he came into contact with Frank Sinatra during a performance at the Murray Franklin’s nightclub in Miami Beach Florida. After sharing some glances and complementing each other’s work, Sinatra became impressed with Rickles and therefore recommended him to other celebrities. This gesture and other support from Sinatra became a breakthrough for Rickle making him a headline performer in events in Las Vegas.

With his warm fan making of people of all ethnicity, Don Rickles gained the nickname The Merchant of Venom and Mr. Warmth. He released a live comedy album Hello, Dummy! In 1968 which was received well and made it to number 54 on the Billboard 200 album chart.

Don Rickles made an acting debut in 1955 in Stage 7 but played a significant film role in Run Silent, Run Deep in 1958. He since then played other roles in films and television especially in sitcoms and dramas during the 1960s. Rickles played a role in Run for Your Life, as a comedian who accidentally strangles a patron in his bid to make him laugh, an act which ended his career. He also played a role as a carnival barker in X: The Man with the X-Ray Eyes.

Don Rickles appeared in several other productions and also frequented on The Tonight Show Starring Johnny Carson after making a debut appearance in 1965. He since co-hosted the show on several occasions. He also appeared on a show like The Munsters, The Dick Van Dyke Show, The Mothers-in-Law, The Addams Family, The Twilight Zone and The Andy Griffith Show among others. In 1968 he starred with comedy writer Pat McCormick in his on variety shows The Don Rickles Show on ABC.

Don Rickles was married to Barbara Sklar on March 14, 1965. The two met through his agent and later fell in love, though Rickles hard difficulties romantically in his 20s and 30s. The couple had two children, Mindy and Larry Rickles. He died on April 6, 2017, of Kidney failure in his Beverly Hills, California home.

Don Rickles won a Primetime Emmy Award in 2009, Legend Award, 2009 and The Johny Carson Award in 2012. Others include the Friars Club Life Achievement Award and were inducted into the Hollywood Walk of Fame in 2000.