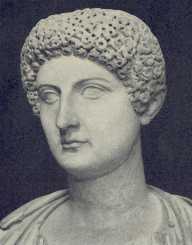 Titus Flavius Domitianus, Domitian was born on October 24, 51 CE in Rome. He was the youngest son of Vespasian, who later become the emperor. His mother Flavia Domitilla Major died when he was still young. Domitian did not receive court education but was naturally bright. In 69 CE, Vespasian was attempting to secure the throne from Emperor Vitellius. Domitian was in Rome with his uncle, and when the Vitellius forces besieged Rome, he was able to escape across the Tiber to safety.

In 81 CE, Titus Flavius Domitianus became the Emperor when his brother Titus died of natural causes. However, there were rumors that Domitian might have been involved in his brother’s death. At the time, he was traveling outside of Rome, but quickly returned to the city upon hearing of his brother’s death and claimed the throne. Domitian started out as an able administrator and cared for the welfare of the people. He restored the ruins of the public buildings and built the temple of Jupiter the Guardian. He also built the new Flavian Palace on Palatine Hill for his residence and official functions. He wanted to raise standards of public morality, and forbade male castration, condemned homosexuality and criticized the Vestal Virgins.

Titus Flavius Domitianus greatly enjoyed games, especially chariot races. He was particularly fond of any event involving women and dwarves. The Colosseum, which was built by his father, was at one point flooded for a naval battle. However, his love for entertainment had a heavy toll on the empire’s finances.

Titus Flavius Domitianus was not an army man and did not receive any training. Nevertheless, he considered himself to be one and continuously advised his generals in the field. In 83 CE, he embarked on a campaign to Germany to gain some credibility with the army. He claimed the mission to be a success and awarded himself with the honor of Germanicus. After four years, the Roman army won a battle at Tapae, but Domitian had to make a truce with Kind Decabalus. Domitian earned the respect of military by giving a raise to the army.

At the beginning of his reign, Domitian was not evil. However, his constant fear of assassination and greed changed his character. He was bold and short-tempered and was also very secretive. Domitian only showed affection towards women. To pay for his extravagances, he seized the fortunes of senators and other wealthy Romans and raised the Jewish tax. He was so paranoid that he accused his wife Domitia Longina of adultery and planned to execute her.

Titus Flavius Domitianus was very proud and saw himself as the absolute ruler, Master of God. He named two months after himself- September- Germanicus, and October- Domitianus. His paranoia led to executions of most of the senators and officers for small offences. Domitian was also jealous of the general Agricola, who won several victories in Britain.

In later years, Domitian took extreme measures to supplement his paranoia and employed individual informers to obtain information on possible rebels and plots. He often ordered to cut off the hands of prisoners. Plots against Domitian did exist, and in 87 CE several senators made a conspiracy against him. The plot was discovered, and the senators were executed.

However, one of the plots against Titus Flavius Domitianus was successful. Domitian was stabbed in the groin by his imperial staff member Stephanus. After this, other conspirators joined and stabbed Domitian to death.