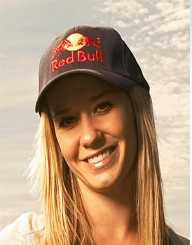 Dallas Jacqueline Friday was born 6th September 1986, in Orlando, Florida, in the United States. She was named after a town called Dallas in North Carolina, where her father grew up.

Dallas Friday was 13 when she began wakeboarding, and she was 14 when she began competing professionally. In 2000, Friday won both the ESPN X-Games and the NBC Gravity Games.

In 2001, she won the World Cup, the Malibu Open, the Vans Triple Crown Ford Ranger Pro, the Cable Wakeboarding Nationals, and the X-Cup. She followed this up in 2003 and 2004 by winning all the professional events except for one.

In 2010, she won two titles and was runner-up in a third competition. She was injured for the rest of the season.

2006:   Female Rider of the Year Award by USA Waterski

2008:   Female Rider of the Year Award by USA Wakeboard