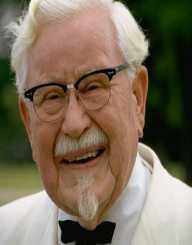 Also Known For : Founder of KFC

Colonel Harland David Sanders was an American businessman known for founding the Kentucky Fried Chicken Restaurant chain (known know as the KFC). He is the ambassador and symbol of the franchise. As a young lad, Colonel Sanders took several jobs as a farm hand, railroad fireman, salesman, and soldier. He began cooking chicken after his service in Corbin, Kentucky. After years of experimenting with different recipes, he achieved the right combination of his secret mix of herbs and spices. This recipe consists of 11 different herbs and spices.

Colonel Sanders used the pressure cooker to prepare the chicken, and this reduced the cooking time, enabling Sanders to serve many customers. The title Colonel was given to Sanders by Governor Ruby Laffoon in a formal decree thus commissioning Sanders as an honorary colonel. Sanders embraced the title colonel, and he took it seriously and would dress in this typical fashion.

He later franchised the KFC around the country and in 1964 sold his share in the company, but would still be associated with the franchise. He remained the leading voice and symbol of the company. The company had over 600 outlets around the United States of America and the world. Sanders published his autobiography, 'Life As I Have Known It Has Been Finger-Lickin' Good.' Fast forward today, and his franchise has outlets around the world in more than 80 countries.

Colonel Sanders was born on 9th September 1890 east of Henryville, Indiana. He was the eldest sibling of three children. His parents were Wilbur David and Margaret Ann Sanders. The Sanders family were mainly Advent Christians.

Sanders was raised in his father's 80-acre farm in Henryville, Indiana. When his father died in 1985, and his mother had to go to work, young Sanders had to look after and cook for his young siblings. By age seven he was skilled with vegetables and bread.

With their mother being away from home days at a time, Colonel Sanders and his siblings had to forage for food. This led him to get work as a farm hand for local farmers.

In 1902, when Sanders mother remarried, they moved to Greenwood, Indiana. Sanders had a tough time with his stepfather, William Broaddus and in 1903, dropped out of seventh grade and went to work as a farm hand.

Sanders left home at the age of 13 and took a job, painting horse carriages in Indianapolis. He moved to Sam Wilson's farm when he was 14 and took up a job as a farmhand.

In 1906, Colonel Sanders left home to live with his uncle, an employee of a streetcar company, where he was fortunate to secure a job as a conductor. This saw him relocating from Greenwood to New Albany, Indiana.

By falsifying his date of birth in October 1906, Colonel Sanders was able to join the United States Army. He completed his service commitment as a teamster in Cuba.

He was discharged from the army in 1907 and relocated to Sheffield, Alabama where he reconnected with his brother who had escaped their stepfather. His uncle helped Sanders secure a job as a blacksmith's helper.

After two months Sanders moved to Jasper, Alabama, getting a job clearing ash pans of trains. He progressed to becoming a fireman (steam engine stoker) at the age of 16.

In 1909, Sanders worked for the Norfolk and Western Railway. Here he met and married Josephine King from Jasper, Alabama.

Colonel Sanders studied law in his spare time through correspondence through the La Salle Extension University. Sanders lost his job in the railway company after a brawl with his colleague. He started practicing law in Little Rock. He did this job for a while saving enough to have his family move to Little Rock. His career as a lawyer ended after a brawl with his client.

In 1920, Sanders established a ferry boat company. He operated the boat in Ohio and became the company's minority shareholder. He later cashed in his shares and started his acetylene lamp manufacturing firm. He then moved to Kentucky and worked as a salesman after the manufacturing company flopped.

In 1930, Colonel Sanders operated a service station for Shell Oil Company in Corbin Kentucky. This is where he began to cook and serve customers chicken, ham, and steaks. By 1935, the Corbin service station became famous for its Kentucky Fried Chicken which he prepared using the 11 secret ingredients to the recipes.

1939 saw Colonel Sanders buy a motel in Asheville, North Carolina. But due to the rationing of oil during the world war 11, the number of customers dwindled and thus Sanders closed the motel.

In 1942, Sanders worked as a hotel supervisor, after which he operated government cafeterias in Tennessee. 1952, Sanders oversaw the first KFC franchise open in Salt Lake City. It was run by Pete Harman.

Sanders sold off the restaurant in 1955 after the interstate was opened. This was because there was less traffic to the Corby restaurant. He took this opportunity to travel around the country appointing franchisees.

KFC became a premier fast food store with franchise store opening internationally. By the 1960s it boasted of stores in Canada, England, Jamaica, and Mexico.

Colonel Sanders eventually sold the Kentucky Fried Chicken for $2 million to John Y. Brown. He, however, retained the Canadian operations and relocated to Mississauga, Ontario. In 1973, Sanders sued the Heublein Inc. which owned KFC franchise for using his image. They, however, reached an agreement.

Colonel Sanders married Josephine King in 1908. They had three children; Harland, Mildred, and Margaret. In 1947, Sanders divorced Josephine and later married his secretary Claudia Ledington. This was after selling his franchise and relocating to Ontario.

Sanders created two institutions which were the Colonel Harland Sanders Trust and Charitable organization which supported charities which cared for women and children.

Colonel Sanders was diagnosed with acute leukemia in 1980. He died in Louisville, Kentucky. He was buried in the Cave Hill Cemetery in Louisville.