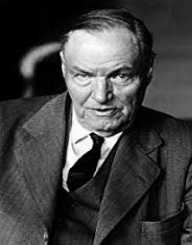 American criminal lawyer Clarence Seward Darrow was born on the 18 April 1857 in Farmdale, Ohio to Emily Eddy and Amirus Darrow. His second name was Seward because his parents admired the abolitionist, William H. Seward, a New York senator.

Both his parents were from New England colonial stock and some of his ancestors had fought in the American Revolution. His parents were both politically active with his mother was a suffragette and his father, an abolitionist.

His father who aspired to be a minister ran a furniture store in Kinsman. Farmdale is a small community in Trumball County, Ohio, close to the township of Kinsman. Darrow spent most of his childhood in Kinsman. His siblings were Edward, Channing, Elizabeth, Hubert, Herman, and Jennie.

Clarence Darrow enrolled at Allegheny College (1872), the same college his father had attended. Leaving after a year, in 1877, he enrolled at the University of Michigan to study law. Because of the expense involved, he left after twelve months.

He then got a job in a law office in Youngstown, Ohio where he worked as an articled law clerk and continued studying law on his own. He passed his legal exams and was called to the bar in Ohio 1879.

Clarence Darrow practiced law in Ohio until 1887; then he moved to Chicago. After reading a book Our Penal Machinery and Its Victim by John Peter Altgeld, Darrow’s views on the criminal mind changed and he began viewing defendants and criminals in a different light.

He got in touch with Altgeld, and the two men became good friends. Altgeld, a judge, soon became his mentor. Altgeld was a member of the Democratic Paty, and Darrow got heavily involved with politics in Chicago. Issues he was concerned with included labor law, social issues and tariff reform. He was a supporter of Henry George’s single tax policy.

George had published Progress and Poverty (1879). Darrow joined the Single Tax Club. By the end of the decade, Darrow had a law office in the Montauk building in Chicago.

The Mayor of Chicago in 1889 offered Clarence Darrow the position of  Special Assessment Attorney. After a few months in the post, he became the Assistant Corporation Counsel for Chicago, later taking over as Corporation Counsel. According to his biographer, was due to his association with Altgeld that he won these positions.

In 1891, Clarence Darrow began working for the Chicago & Northwestern Railway Company part-time in their legal department. Then in 1892, he formed a law firm Collins, Goodrich, Darrow & Vincent with offices in the Rookery Building in the Loop area of Chicago. Darrow went on to become famous as a national as well as an international criminal lawyer.

He defended over a hundred clients in murder trials and not one of his clients died in the electric chair or the gallows. He also became famous for his oratory, being a supporter of workers and a champion of the downtrodden.

Clarence Darrow was a published writer, and his output includes The Persian Pearl (1899) a collection of essays, Farmington (1906), a memoir about his formative years growing up in Ohio, Crime: Its Cause and Treatment (1922) and Infidels and Heretics: An Agnostic’s Anthology (1929). He published an autobiography, The Story of My Life (1932).

Clarence Darrow's first wife was Jessie Ohl (m.1880-div.1897). The couple had a son, Paul Edward (b.1883). In 1903, he married Ruby Hammerstrom. Darrow considered himself an atheist and called himself a humanist. Clarence Darrow died on the 13 March 1938 from heart disease.