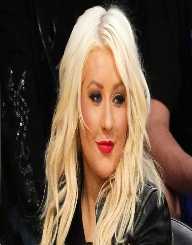 Christina Aguilera was born on December 18, 1980, in New York City, New York, USA. Her parents are Shelly Fidler and Fausto Aguilera. Her siblings are Michael, Stephanie, Rachel, and Casey. Aguilera’s parents divorced when she was a child. She then lived with her mother and her grandmother.

As a child, Christina Aguilera attended Rochester Area School District before going onto attend Marshall Middle School. While in school, she was often bullied because of her early acting career with Disney on The Mickey Mouse Club. Eventually, because of her bullying problem, Aguilera’s mother decided to homeschool her.

Christina Aguilera has had a love for music ever since she was a child. She often performed in talent competitions as a child and teenager. However, it wasn’t until 1998 that her professional music career began when she recorded a cover of the Disney song, “Reflection” from the animated movie, Mulan. Soon after, she signed a contract with RCA Records. Christina Aguilera then released her first self-titled album with this record company in 1999. The album was a major success, and reached the RIAA 8x Platinum, selling more than 14,000,000 records worldwide.

Aguilera’s second album, Mi Reflejo, was released in 2000 with BGM U.S. Latin Records. This album was not as popular as her first album, but it still went RIAA 6x Platinum and sold more than 3,000,000 albums worldwide. For her third album, she returned to working with RCA Records to release My Kind of Christmas in late 2000. This album was even less successful than her second album, but it still went Platinum. Her next album, Stripped, was released in 2002. This album was almost as famous as her first album, selling more than 10,000,000 albums worldwide. It then wasn’t until 2006 that she released her next album, Back to Basics. This album reached #1 on the charts around the world.

Christina Aguilera released her next album, Bionic, in 2010. This album was in the top 10 in the charts around the world. So far, it has reached a status of RIAA Gold. Her most recent album, Lotus, was released in 2012. So far, it has sold over 200,000 copies in the United States.

As a child, Christina Aguilera was on the Disney show The Mickey Mouse Club. She was on this show for about two years. Many other future celebrities, like Justin Timberlake, also had their acting start on this show. However, after working on this show, Aguilera mostly focused on her musical career for several years. It wasn’t until the 2010’s that she returned to the screen.

In 2010, Christina Aguilera had a small part in the film Get Him to the Greek and a much larger part in the film Burlesque. Then, in 2011, she began working as a judge on the singing television show, The Voice. She continued to work on this show until 2016. She later played herself as a judge on this show in the comedy musical film Pitch Perfect 2.

Some of Aguilera’s other most recent projects include both voice acting roles and live acting roles. Some of the films and television shows she has appeared in include Nashville and The Emjoi Movie. Christina Aguilera is also scheduled to perform in the Zoe and Broadway 4D, which are both expected to be released in 2018.

Over the course of her acting and musical career, Christina Aguilera has won over a dozen awards and has been nominated for more than a dozen others. Some of her most impressive awards are listed below.

Christina Aguilera earned a Star on the Walk of Fame in 2010.