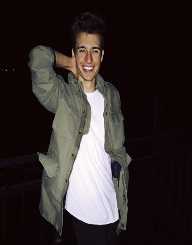 Christian Collins also known as ‘Weekly Chris’ is famous for his YouTube videos. He started recording at an early age of 11 and has over million subscribers. His videos are refreshingly original, and this has led to his immense popularity.

His collaboration with Sour Patch kids has also given him commercial success. He is expected to achieve even greater success because of his early start.

Christian Collins was born in Canada on 18th April 1996. His parents are John and Stacey Collins, and he was homeschooled. He was always interested in computer programming and creating video games. Christian Collins used his mother’s pink video recorder to make fun videos. He started creating videos from the age of 11.  He loaded the videos on his channel on YouTube, and they were very well received.

Christian Collins gained fame and popularity and was known as “Weekly Chris.”  His videos have become viral, and he is famous all over the world. His humble and attractive personality makes him very popular with his fans, especially girls.

Christian Collins is a versatile entertainer. He is multi-talented. He is a rapper, singer, beat boxer, and drummer. He also plays the piano. When he was in the ninth grade Collins wanted to take up a job in Subway. His father suggested monetizing his channel and taking up a career as a singer. This was a great decision in making him a popular singer. As an actor and song writer, he likes his songs to be meaningful.

Christian Collins believes in sending positive messages to people through his songs. Collins likes to continuously re-invent himself and likes working on new projects and ideas. He can anticipate what the audience likes and wants. Christian Collins has a great working relationship with his producer Swagga BOB.  He is a down to earth person and has not let his fame affect him.

Christian Collins was selected to represent Social media Community as part of U.N. Ambassadors for Peace in the International Peace Day celebrations. Christian Collins has collaborated with ‘Sour Patch kids’ band and created skits and series for them.He has cut a song with Ringo Starr as part of his role as a U.N. Youth ambassador.

Christian Collins has signed a management deal with Randy Jackson famous American Idol judge. Randy Jackson will help in guiding, launching and release of his new EP and a tour in 2017.

Christian Collins is the 2nd oldest of 4 children in the family. His parents are happily married. His family is his greatest strength and support. His siblings are Kirsten Collins, Crawford Collins and Karisma Collins. Crawford and Karisma are web stars, and his eldest sister Kirsten is a pop singer.

Christian Collins has already released singles ‘Don’t let go and One’ with his sister Kirsten Collins. He believes that his family keeps him grounded. He collaborates with his siblings, and they help in giving him new ideas.

They are also his best critics. He was a very shy kid, but according to his sister Kirsten, he took something that wasn’t his strength and made it his biggest strength.