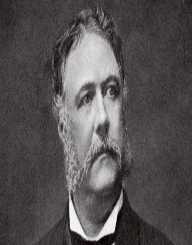 American politician and attorney Chester Alan Arthur was born on the 5 October 1829 in Fairfield, Vermont in the United States. He was the son of, William Arthur, an abolitionist preacher who had emigrated from Northern Ireland. Arthur’s mother was Malvina Stone who came from Vermont. Arthur was raised in Vermont and upstate New York.

Chester Alan Arthur attended Union College in Schenectady, New York graduating in 1848, then worked as a school teacher. Continuing with his studies, he read law at the State and National Law School in Ballston Spa, New York.

During his time as an educator, Chester Alan Arthur was the principal of schools in Vermont, North Pownal and Cohoes, New York. After being admitted to the bar in 1854, he started working for a prominent law firm in New York City. During the American Civil War joined the state militia (1858-1863) and was Quartermaster General of New York.

Republican Party Senator Roscoe Conkling who was the faction leader of the Stalwarts had observed during the American Civil War (April 1861-April 1865) that Chester Alan Arthur was a good administrator when he was Quartermaster General of New York. He was also impressed with his legal ability. Conkling’s recommendation led to President Grant ( (in office 1869–77) appointing Arthur Collector of the Port of New York in 1871. Part of Arthur’s job was to collect kickbacks from custom house employees who were members of the Republican Party.

By 1881 Arthur was Vice-President under President James Garfield. When President Garfield appointed a member of another Republican to the post of Collector of the Port of New York, this led to friction between the two men. The new appointment meant that Conkling’s power was diminished.

After the assassination of President James Garfield on the 19 September 1981, as Vice-President Arthur became the 21st President of the United States.

President Chester Alan Arthur focused on domestic affairs and the reformation of the civil service. He was in favor of the Pendleton Act which attempted to end patronage and cronyism by enforcing examinations for government employees. The law also banned kickbacks and encouraged promotion based on merit. Arthur also was in favor of tariff reduction. Arthur vetoed the Rivers & Harbors Act (1882) but supported the Chinese Exclusion Act (1882).

Arthur hired the designer Louis Comfort Tiffany to update the decor at the White House.

Chester Alan Arthur was diagnosed with kidney disease in 1982.

By 1886 Arthur's health had further deteriorated, and he died of a stroke on the 18 November 1886 at the age of fifty-seven.

Political historians regard President Chester Arthur as a reformer and a president who focused on the reunification of the country.

Arthur was a keen fisherman.