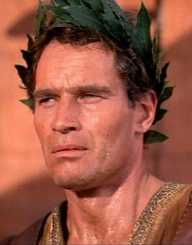 Russel and Lila Whitford Carter were the parents of Charlton Heston, who was born on the 4th day of October in the year 1923. Charlton’s dad was of Scottish descent and worked as one of the rural sawmill operators in Evanston, Illinois.

Charlton lived his early years in the forest regions and attended the New Trier High School. His parents separated when he was ten years old. The name Heston was from the man that his mother remarried who was known as Chester Heston.

His parents divorced when he was ten years old and his mother eventually married a man called Chester Heston. Charlton got introduced to the world of dramatics in high school and he got involved in a couple of school plays. His first amateur role was a place in the screen adaptation of the book, Peer Gynt in 1941.

Since he held out a ray of promise with his aptitude and acting skills, it was not a surprise when he got a scholarship. The Northwestern University offered him a place for further studies in drama under the tutelage of renowned names like the well-acclaimed Alvina Krause.

In the bloom of the war years, he enlisted in the military in 1944, taking up a place in the American Air Force. He worked his way as a radio operator and also as one of the combat aerial gunners. The peak of his career in the Army was his promotion to the position of staff sergeant.

Charlton had his military discharge in 1946 and moved on to the city of New York. He set his sights on the stage once more to pick up acting roles. He debuted in Broadway, by snapping a role “Antony and Cleopatra” in the year 1947. He went for a full blown acting career using the name Charlton Heston.

As his talent became noticeable, Hollywood called for his attention. His first film was in 1950, for a role in’ Dark City’. One of his other highlights was his role as the circus manager in the 1952 show by Cecil B. DeMille, “The Greatest Show on Earth”

The film, “The President’s Lady”, based on the presidency of the American president, Andrew Jackson, was his next role in 1953. He also played Moses in the epic film, The Ten Commandments by the year 1956. This earned him a reputation as one of the icons of all time in the Hollywood industry. This film got the screenplay attention in many countries of the world.

More of such iconic roles were to beckon on Charlton, And by 1959, getting cast as Judah Ben Hur in the movie adaptation of Lew Wallace’s 1880 classic “Ben Hur” was a huge push. His acclaim got a further bounce by roles in the 1966 film, ‘Khartoum’ and the 1968 film, ‘Planet of the Apes’.

Charlton was also well-reviewed for roles as Mark Antony in the 1970 classic, “Julius Caesar” and “Call of the Wind “in 1972.  He also took lead roles in the films “The Three Musketeers in 1973 and “The Four Musketeers” in 1974. These were also unforgettable and an encore of his surging reputation.

His role in the civil rights movement is also worthy of note, as he was involved in the civil right s march of 1963. Tagging alongside the revered Martin Luther King for the march was of course not without attention.

In 1959, Charlton got an Academy Award for his iconic portrayal of Ben Hur, which counts for one of the bestselling films of all times. Ben Hur held the record as the bestselling movie of the 20th century. The film was topically well-received across the globe and has remained a reference point across the 20th and 21st centuries.

His evident physique is one that calls for attention as he is well-chiseled down the chest. This called for his attention whenever a role demanded a full-figured actor around Hollywood.

He is also remembered for his service to the nation as a military operative in the U.S Air Force.

He has been celebrated over the years and in 1967, he got the honors in Cecil B. DeMille Award. The Cecil B. DeMille Award honors proven names for their contributions to the Entertainment world across the globe. The Order of Lincoln was presented in 1977 to him for recognition in the realm of Performing Arts by the Governor of Illinois.

He was also awarded in 2003 with the Presidential Medal of Freedom in recognition of his contributions to the American society by President George W. Bush.

Charlton served in his twilight years in the National Rifle Association as president during the years, 1998–2003.

Charlton Heston had a life-long marriage to Lydia Marie Clarke, who was also an actress. They married in 1944 and March 17th, to be precise.  They had two children during their 64 years of intimacy till his death in 2008.