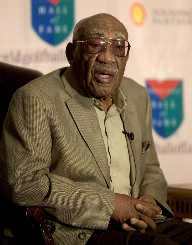 Charles Sifford is a professional golfer who is known in the history of golf like the one who paved the way for African-American athletes such as Lee Elder, Calvin Peete, and Tiger Woods at the PGA. He was dubbed as the Jackie Robinson of their time and an inductee at the World Golf Hall of Fame. Sifford also published an autobiography entitled Just Let Me Play which was released in 1992. He died at the age of 92 from suffering a stroke on February 3, 2015, at Cleveland, Ohio.

Charles Sifford married a woman named Rose who was supportive in his career as a professional golfer. The couple had two sons together named Charles Jr. and Craig.

Born on June 2, 1922, as Charles Luther Sifford in Charlotte, North Carolina, he became involved in the sport at the age of 13 as a caddie. For his work, he earned 60 cents per day which went to their family's expense as additional support. He quickly adopted the necessary skills for the sport and relocated to Philadelphia at the age of 17 and was a regular competitor at the local competitions against fellow African American folks.

Charles Sifford began playing as a professional golfer at the age of 26 in 1948 where he won the National Negro Open hosted by the United Golf's Association six times. Aside from playing the sport, he also turned to coach wherein he served as the golf instructor of Billy Eckstine who also served as his financial sponsor during his games when he was unable to find himself one. Besides Eckstine, he was also backed by prominent Black athletes at the time such as boxing professionals Joe Louis and Ray Robinson and pro baseball pitcher Don Newcombe and even Jackie Robinson himself.

Sifford's name went down in history as when he became the first African-American pro golfer to win at the Long Beach Open against the majority of white golfers. The event was co-sponsored by the PGA in 1957 and Sifford managed to dominate the tournament despite the racial slurs and threats hurled his way.

Charles Sifford further cemented his place in the history of golf in 1967 when he trumped over the Greater Hartford Open which was fully authorized by the PGA. He was the first African American golfer to win the event and also topped the Los Angeles Open tournament in 1969.

Charles Sifford earned a place at the World Golf Hall of Fame as the first African-American to be inducted in 2004. In 2007, he became the recipient of the Golf Course Superintendents Association of America's highest honor, the Old Tom Morris Award.

US President Barack Obama also presented to him the nation's highest civilian award, the Presidential Merit of Freedom, in 2014 for his contributions.