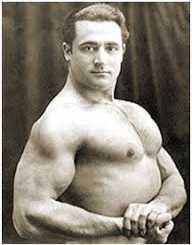 Angelo Siciliano alias Charles Atlas was born 30th October 1892, in Acri, Cosenza, in Italy. He moved to the United States with his family in 1903, and they settled in Brooklyn, New York.

Charles Atlas started his career as a leather worker, but he had a keen interest in exercise. He tried different types of exercise, including weight lifting, calisthenics, and resistance training, but couldn’t find one that successfully developed muscles for him. He would watch other health and fitness experts such as Bernarr MacFadden and Eugen Sandow.

Unable to join the YMCA because of financial constraints, Atlas used to watch exercises being done, and he then went home and practiced on his own. He used to watch various strongmen as they did their shows, and he would later quiz them on their exercise routines and their dietary intake.

Charles Atlas finally put together his system which became known as Dynamic Tension. In 1922, he changed his name to Charles Atlas as it had an American sound to it. It was also around this time that he met Dr. Frederick Tilney who was a course writer for Bernarr MacFadden.

Atlas had written his fitness course, but he needed someone to edit it, so he asked Tilney if he was interested. After they reached an agreement, Atlas was in business. The program Atlas created was called, Dynamic Tension, and it consisted of 13 lessons. Atlas soon became synonymous with fitness, and over the years millions of his programs have sold.

Charles Atlas' program was advertised consistently in the print media, and for many years appeared in comics as well as other magazines read by boys. The advertisements continued to run for years after Atlas died. There were several versions of the ad, each with their byline. Some of these included, The Insult that Made a Man out of Mac, Hey, Skinny! Yer Ribs are Showing!, and The Insult that Turned a Chump into a Champ.

Charles Atlas married Margaret Cassano in 1918, and they were together until 1965 when Cassano died. They had two children, a son, and a daughter.

In later years, Atlas used to get chest pain when exercising. He had blocked arteries, and he died on 24th December 1972.