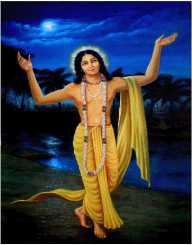 Chaitanya Mahaprabhu was born on February 18th, 1486 in Nabadwip Dham (currently Nadia, West Bengal), India. He was the tenth child of Jagannath Mishra and Sachi Devi. Mahaprabhu was nicknamed Nimai during his childhood.

His maternal grandfather predicted that he will grow up to be a great leader in future. Indeed his grandfather’s prediction came to pass. Mahaprabhu turned out to be quite bright growing up.  He was as especially interested in Religious matters.

The bright Chaitanya Mahaprabhu joined the Gurukula of Gangadasa Pandita situated in Ganganagar. He was eight years old at the time. He did quite well in his studies. Subsequently, he became a Sanskrit grammar and rhetoric scholar.

In his teenage years, Chaitanya Mahaprabhu went to Gaya. He then met Ishvara Puri who later became his guru. Puri was a great influence to Mahaprabhu, especially on religious matters.

Chaitanya Mahaprabhu began his preaching career upon his return to Bengal. He then became quite famous or his religious preaching.  In no time, he was appointed at Nadia’s Vaishnava group as the eminent leader. He later became a sannyasi.

As a Sannyasi, he toured many Indian countries at a mission of popularizing Lord Krishna.  He also spread the name of the Krishna sankirtana. , Chaitanya Mahaprabhu had a major role in the Bhakti movement. Later, he established a religious movement called the Gaudiya Vaishnavism. He was also the founder of the Vedanta school known as Achintya-Bheda-Abheda.

Chaitanya Mahaprabhu tied the knot with Laksmidevi at in his early teens. She was Vallabhachaarya’s daughters.