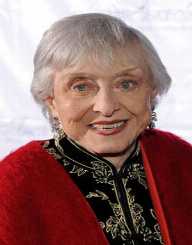 Celeste Holm was born April 29, 1917, in New York. She was the only child of her parents. Her father Theodor Holm was Norwegian, while her mother Jean Parke was American. Theodor worked as an insurance adjuster with Lloyds, based in London. Her mother was a portrait painter.

Celeste Holm spent her early years in Manhattan, New York. Her education was punctuated with several travels. Owing to her parents work, Holm studied in different schools in Europe.

She attended schools in France, the Netherlands. Holm then went back to the US. In the US, she attended high school at the University School for Girls. Holm later transferred to Francis W. Parker School. Both schools were in Chicago. In 1935, she graduated from high school. She then went to the University of Chicago where she studied drama.

Celeste Holm's professional acting career lasted over 60 years. She started acting in 1936 while at the University of Chicago. After graduating from the university, she went to Broadway Theater in New York. It is at Broadway that she made her career. Holm’s first appearance was in a stage play called Hamlet in 1938.

She then starred in The Time of Your Life in 1939. This play done at Broadway won her the Pulitzer Award. Her career turned for the better. Holm then got a role in the stage play Oklahoma. In 1944, she featured in another stage play called Bloomer Girl.

Celeste Holm then went to film productions. She got a contract from 20th Century Fox in 1946. That same year, she debuted in the film Three Little Girls in Blue. In 1947, she again featured in another blockbuster called Gentleman’s Agreement.

Holm did a supporting role in the film All About Eve. She then returned to stage play production. While at the theater, she appeared in several productions. The most memorable productions were The Tender Trap done in 1955, and High Society, done in 1956. In both productions, she appeared alongside music maestro Frank Sinatra. Holm then went back to film acting.

Celeste Holm also made numerous television series. This was in the late 1950s to the 1970s. The series included Honestly Celeste, The Fairy Godmother, and The Utter of Morrissey Hall. In the next two decades, Holm did both television and big screen roles.

She got the Sarah Siddons Award in 1968. The late US President Ronald Reagan appointed her to the National Arts Council. In 1979, Holm was knighted by the Norwegian King Olav. In 1992, she was inducted to the American Theater Hall of Fame. Holm was the chairperson of the Board of Arts Horizon from 1995.

In 1995, she was an inductee at the Scandinavian-American Hall of Fame. In 2006, Holm was honored at Brandeis University. She got the Lifetime Achievement Award from the SunDeis Film Festival. Holm has life membership of The Actors Studio.

In her life, she championed activities done by non-profit organizations.

Celeste Holm married five times in her lifetime. Her first marriage was to Ralph Nelson in 1936. The couple divorced in 1939. They had a son born in 1937 called Ted Nelson.

She married again in January 1940. The second husband was Francis Emerson Davies. The union with the Roman Catholic Davies ended in May 1945.

The third husband was known as Schuyler Dunning. They were married from 1946 to 1952. They had one son called Daniel Dunning.

The last husband was Frank Basile. They got married in April 2004. At the time of the wedding, Holm was 46 years older than Basile. They were married until the death of Celeste Holm.

Celeste Holm transcended continental barriers. Her work was honored both in America and Scandinavia. Though she had a sad private life, her public career was inspiring to many.