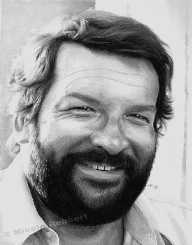 Actor Bud Spencer was born on the 31 October 1929 in Naples, Italy as Carlo Pedersoli. He was a good student and sportsman, excelling at swimming.

Before his family moved to South America in 1947, Bud Spencer was a student at Sapienza University of Rome.

Bud Spencer rose to fame after teaming up with Terrence Hill and starring in what became known as Spaghetti Westerns. They first starred in God Forgives. I Don’t! (1967). And after following it up with Ace High (1968) and They Call Me Trinity (1970) they established an audience and went on to star in over a dozen more including Watch Out, We’re Mad (1974), Crime Busters (1977) and Double Trouble (1984).

In addition to his acting career, Spencer was involved in an air transport company which he owned, Mistral Air. He was a qualified pilot, an author and at one stage was the owner of clothing business.

Bud Spencer became actively involved in politics in 2005 as a regional councilor in the center-right Forza Italia party.

Bud Spencer won a silver medal for swimming at the 1951 Mediterranean Games and three years later won was in the water polo with SS Lazio that won the Italian Championship in 1954. In 1955, his team won gold at the Mediterranean Games in Barcelona. As a swimmer, also participated in the Summer Olympic Games in Helsinki 1952 and Melbourne 1956. Spencer was also the first Italian to swim the 100-meter freestyle in under a minute.

In January 2005 Bud Spencer was awarded the Gold Caiman by the Italian Swimming Federation, and in 2007, he received coach diplomas for swimming and water polo from the federation.

Bud Spencer won the Jupiter Award for Best International Actor in 1978 and 1979. Awards since then include a 2004 Silver Ribbon: Best Supporting Actor from the National Syndicate of Film Journalists, a 2010 David di Donatello Awards: Career David and in 2012, the Italian Online Movie Awards: Lifetime Achievement Award.

Bud Spencer and Maria Amato married in 1960. His wife was the daughter of Giuseppe Amata, an Italian film producer. The couple had three children together, Giuseppe (b.1961), Christiana (b.1962) and Diamante (b.1972). Spencer died in Rome on the 27 June 20116. Bud Spencer was eighty-six years of age and died of natural causes.