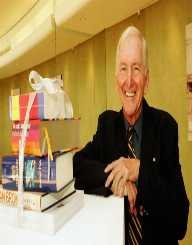 Bryce Courtenay was born on August 14th, 1933. He was both a South African and an Australian author who rose to fame for his notable work The Power of One. This work landed him recognition as one of the bestselling authors in Australia.

Bryce Courtenay was born on August 14th, 1933. His place of birth was in Johannesburg in South Africa. His parents were Arthur Ryder and Maude Greer. His mother, Geer, worked as a dressmaker. On the other hand, his father Ryder was a clothing salesman. Courtenay was born out of wedlock because his parents were not legally married. In fact, his father had a family with six children. Regardless of this, he maintained a close bond with Courtenay’s mother. With time, the pair also had another girl child named Bryce who became his sister. During Courtenay’s tender years, he spent most of the time in the Lebombo Mountains situated in Limpopo province. Later on, he went to school at King Edward VII School.

Years later while Bryce Courtenay was pursuing his journalism course in London, he crossed paths with a lady that would later become his wife. She was called Benita Solomon. In 1958, the pair traveled together to Sydney. A year later, they tied the knot and welcomed three sons into their relationship namely Damon, Adam and Brett. The pair divorced each other in 2000 following the acknowledgment of Courtenay for having sexual affairs with other women.

His passion for his journalism career landed Courtenay in the advertising industry. He spent approximately 34 years in this industry. Initially, he worked for McCann Erickson advertising agency before working with J. Walter Thompson and later George Patterson Advertising. During this time, he earned fame through the award-winning campaigns that he directed including the Milkbar commercial and Louie the Fly.

Bryce Courtenay rise to stardom came through the novels that he wrote. These novels were primarily based in his original South African homeland or Australia. In 1989, he published his first novel called The Power of One. At the time of publishing his first piece, he was hesitant of the fact that the book would not sell out there. To his surprise, the book earned him numerous followers for being a bestselling book in entire Australia. The popularity of the book contributed to its adoption into a film.

With the release of his debut book that earned him high acclaim, Courtenay ensured that he kept close contact with his readers. At some point, he went to the streets to market his books. Courtenay could offer over 2,000 books in the streets to his readers. Nonetheless, The Power of One was the only book that got to be published in the US.

After writing his last book dubbed, Jack of Diamonds, Courtenay passed away on November 22nd, 2012. He was 79 years old at the time of his demise.