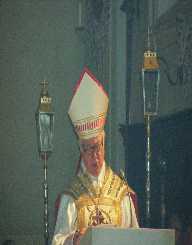 Bruno Platter was born on the 21 March 1944 in Ritten, South Tyrol, Italy. At the time the area was occupied by Nazi Germany.

His first step in the Teutonic Order took place on the 12 September 1964 and his last on the 15 September 1969. Bruno Platter was ordained on the 29 June 1970. He was awarded a PhD. in theology from the University of Innsbruck in 1973. His thesis was: The Justification for the Prohibition of Mixed Marriages: A Theological and Legal-Historical Study.

Bruno Platter initially was sent to the Priory of South Tyrol where he taught in the church’s school in Bolzano. He then became rector of the Church of St George in Wegenstein in 1974.

Grand Master Of The Teutonic Order

In 2000 Bruno Platter was elected Grand Master of the Teutonic Order at the general chapter in Lana, South Tyrol. In 2006, in Vienna, Austria, he was re-elected,