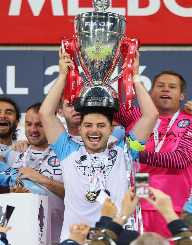 Bruno Fornaroli is a footballer from Uruguay who plays as a forward for the Melbourne City club. Voted by many experts as one of the greatest forwards in Australian Club history, Fornaroli is also known as El Tuna, or the Prickly Pear. He earned this nickname due to his spiky hairstyle.

Bruno Fornaroli is the record holder for the most goals scored (23 in number) in a regular season of Australian A-league and has won a golden boot for his performance.

Bruno Fornaroli was born in Salto, Uruguay on September 7, 1987. His star sign is Virgo. Like many young kids from Uruguay do, Fornaroli also dreamed of becoming a footballer. Bruno Fornaroli even kept 16 footballs at his home at one time. Fornaroli Sr., Bruno’s father, didn’t want him to play football as he was scared for his son’s future. However, Bruno was determined to become a football player.

Bruno Fornaroli began playing professional football in 2005 at the age of 18. He showed his talents early in his career and scored 12 goals in 20 appearances in his debut year. In 2008, he was transferred to UC Sampdoria – an Italian Club, where he signed a five-year contract.

Although Bruno Fornaroli was initially very successful in the first few games of the UEFA Cup, in the year 2009 he went goal-less in all his five matches for the Sampdoria. A series of loans followed after where he was first moved to San Lorenzo de Almagro. Bruno Fornaroli scored twice in 15 matches for this club. Then he was moved to the Spanish club Recreativo Huelva.

Finally, he was called back to Sampdoria again when the team themselves weren’t doing very well. His drought of goals continued over the next few years, however, in which he played for the Danubio F.C. and the Panathinaikos F.C. All this changed in 2015.

Bruno Fornaroli signed a two-year deal with Melbourne City and scored his first goal for them in his very first appearance. The year was fruitful to him, and he raced to the tally of 11 goals in the Australian A-league. He became the quickest player to achieve this feat. Fornaroli finished the season with 23 goals and won the Golden boot of the year. He was also named the Melbourne City’s Player of the year.

With his continued success, his stardom reached new heights. In 2016, his contract with Melbourne City was renewed for three years, and he became a marquee player. Bruno Fornaroli was also made the Melbourne City’s Captain. Fornaroli now also holds the record of being the fastest player to score 30 goals in the Australian A-league.

Bruno Fornaroli is quite educated and speaks four different languages – Spanish, Portuguese, Italian and English. Although his English is not perfect, he is working on improving it. He is married and has a two-year-old child.