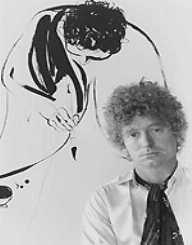 Brett Whiteley was born on April 7, 1939, in Australia. His mother was Beryl Whiteley.

Brett Whiteley began painting and doing other forms of art while he was a child, as most children do. Unlike most children, he was especially passionate about his hobby and was determined from a young age to pursue art as a career. As a teenager, Brett Whiteley took art classes. This helped to develop his artwork.

In 1956, he began attending the National Art School. It was while here that Whiteley produced his first professional piece of artwork in 1958, called The Soup Kitchen. He finished his studies in 1959.

Brett Whiteley’s career was arguably the most impressive during the 1960’s. It was during this time that Brett Whiteley lived in London. While here, he made some of his most famous art pieces, like Bathing. It was also in this decade that Whitely became obsessed with the English serial killer, John Christie. He made a sculpture of Christie’s head, which would later go on to be one of Whiteley’s most morbid and most famous piece of art. He also made several paintings of Christie, which was also famous. Also around this time, he made several paintings of animals, like Two Indonesian Giraffes.

In 1967, Brett Whiteley earned the Harkness Fellowship, which was a scholarship which allowed him to live and work in New York. While here, he made friends with other artists, which no doubt influenced his own art. Much of his work during this time was also inspired by the American Civil Rights movements and the many protests around the country urging the government to stop the Vietnam War. During this time, Brett Whiteley was also using drugs, which many other artists and musicians did during this time, which likely affected his art as well.

Brett Whiteley made some phenomenal art pieces during the 1970’s. One of his paintings, The Night Cafe, was inspired by the styling of Vincent Van Gogh. Between 1972 and 1973, he also worked on a painting called Alchemy. This would go on to be one of his most famous works of art. It was even on the cover of the Dire Straits album with the same title.

In the mid-1970’s, Brett Whiteley was back in Australia, spending most of his time in Sydney. Here, he spent much of his time painting landscapes. Some of his famous painting from this period include The South Coast After Rain.

All of Whiteley’s awards and accomplishments are due to his achievements in art. Some of his most prestigious awards are listed below.

In 1991, Brett Whiteley was made an Officer of the Order of Australia for his contribution to the arts.

Brett Whiteley married Wendy Julius in 1962. This couple had one child together, Arkie. The couple later divorced in 1989.

Drug Use And Death

Near the end of his life, Brett Whiteley became increasingly dependent on alcohol. It was also in his later life that he became addicted to heroin. Both of these addictions lead to a steep decline in his health. Brett Whiteley died on June 15, 1992. The cause of death was a drug overdose. He was 53 years old when he passed away.

The Art Gallery of New South Wales made Whiteley’s home (the place he lived at the time of his death) into the Brett Whiteley Studio Museum.

After Brett Whiteley died, his artwork became much more valuable. Many of his paintings sold for millions of dollars.