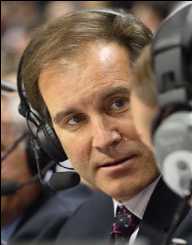 One of Nessler’s first commenting jobs was working for the Georgia Tech basketball team in 1980. His co-host at the time was Al Ciraldo. Brad Nessler stayed with this team until 1981. In 1982, he began to comment for the Atlanta Falcons.

In 1990, Brad Nessler began working for CBS Sports as a commentator. While with his group, he commented for many sports teams for sports like basketball and football. He did this until 1991.

In 2002, Brad Nessler began to comment for the NBA college basketball games. He did this until 2004. He resumed doing this same job in 2006 and currently continues to work with the NBA.

Working with ESPN again in 2006, Nessler started to comment on Monday Night Football. Some of his co-hosts for the games were Bonnie Bernstein, Dick Vermeil,  Ron Jaworski, Trent Dilfer, and Suzy Kolber. He did this job until 2011.

In 2011, Brad Nessler began working with the NFL Network. With this group, he commented on the Thursday Night Football games. His co-host for these games was Mike Maycock. He worked with this group until 2013.

In 2016, it was announced that Brad Nessler would begin working with CBS for the 2017 season. He is going to be hosting with Gary Danielson again and for the first time, Allie LaForce.

Throughout his long commenting career, from 1970 to 2016, Brad Nessler has commented on many sports games which have been aired on television. Because of this, Nessler himself has also appeared on television. He has also been nominated for two awards (both CableACE Sports Play-By-Play Announcer Awards) for these television airing for his commenting. However, he has also made appearances both in film and in a video game. These feats are listed below.

In 1985, Brad Nessler played a small role as a reporter in the sport’s film The Slugger’s Wife.

Brad Nessler is married to Nancy Nessler. Together, they have one daughter.