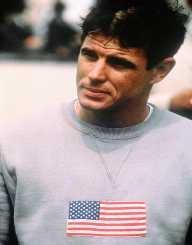 American actor Brad Davis was born in Tallahassee Florida. He was raised in Titusville and moved to New York City as a teenager. His parents were Eugene Davis and Anne Creel. Accordingly to an article in the New York Times (April 1997), he had a difficult childhood with an alcoholic father and sexually abusive mother.

Brad Davis studied at the American Academy of Dramatic Arts and also had lessons with the acting coach Wynn Handman.

Brad Davis took various small roles in off-broadway productions and television before landing a role in the successful miniseries Roots (1976) which was based on Arthur Haley’s novel of the same name.

Brad Davis shot to prominence with the film Midnight Express (1978). He played the part of Bill Hayes, a young American college student, caught up in a nightmare situation in jail in Istanbul Turkey.

He appeared the 1981 Oscar-winning film Chariots of Fire which was centered around two British athletes at the Summer Olympics of 1924. Davis portrayed Jackson Scholz. Brad Davis also starred in The Normal Heart (1985) a play about AIDs-HIV.

After his early success in the film industry, Brad Davis battled substance abuse issues but by 1981 had overcome them. He was married to Susan Bluestein for fifteen years, and they had one child, Alex.