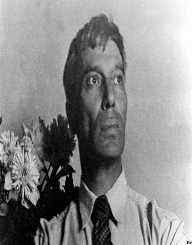 Russian author Boris Pasternak was born in Moscow on the 10 February 1890. His father Leonid Pasternak was a painter, illustrator of Tolstoy’s work and a professor of art and architecture. His mother, Rosa Kaufman, a concert pianist and he was one of four children.

Boris Pasternak received classical training at a German Gymnasium in Moscow; his favorite subjects were botany and music. Between 1904 and 1910, he studied musical composition at the Moscow Conservatory but abandoned the of making it a career because he did not believe that he was kind enough to be the best. Pasternak consequently left Russia and studied philosophy at the University of Marburg in Germany. After four months at University in Germany, he traveled around Italy then returned home to Russia.

During WWI Boris Pasternak did not serve in the army because of a physical disability caused by a fall in childhood. He spent the war years working in a chemical factory. While away from Moscow, Pasternak spent his time composing verse. When the Russian Revolution of 1917 began, Pasternak was back living in Moscow. After the revolution, the majority of his family left Russia and settled in Germany. Pasternak visited Berlin in 1922, but that was the last time he ever saw his family. All his applications to travel to see them were refused. Lenin died in 1924, and Stalin took over in 1928 after Trotsky was exiled. The general atmosphere extended to the literary world with the Socialist Realism and the Writers Union set up to vet all publications.

Some of his early work included My Sister Life (1922) and Themes and Variations (1923) both of which he started during the revolution of 1917. These publications made his mark as a poet in Russia and marked him as one of the famous writers of his generation. His next book Sublime Malady (1924) dealt with the revolt in Russia of 1905, and The Childhood Luvers subject matter was a psychological portrait of a young girl on the brink of womanhood. Boris Pasternak also produced a collection of short stories, Aerial Ways. In 1927 he published two poems, Lieutenant Schmidt, depicting the fate of Lieutenant Schmidt at Sevastopol and The Year 1905, another look at the revolution of 1905.

Pasternak wrote an autobiography Safe Conduct (1931). In 1932 he released Second Birth, a collection he wrote with Zinaida Neuhaus, who would be his second wife, in mind. Pasternak continued working as a translator including translations of Shakespeare, Goethe, Schiller, Ben Johnson, Swinburne, and Shelley. He walked a tightrope, wanting to remain published and autonomous but at the same time not to be seen as a puppet of the Soviets. His collection of poems entitled The Artist prompted the head of the Writers Union to target him as a traitor. Pasternak was ignored mainly from then onwards, but he was still considered the leading Russian poet by the public. Boris Pasternak continued working as a translator who was well paid and enabled him to buy a house. He was also working on a novel which later became Doctor Zhivago.

Boris Pasternak won the Nobel Prize in Literature in 1958 for his contemporary poetry in the field of the Russian epic tradition. Initially, he accepted the prize but later, after pressure from Russia, had to decline it.

His first wife was Evgeniya Lurye who he married in 1922, and they had a son Evgeny (b.1923). Ten years later, Boris Pasternak met Zinaida Neigauz and divorced Lurye so that he could marry Neigauz. He also had a long-term relationship with Olga Ivinskaya but stayed married to Neigauz.

Boris Pasternak died in 1960 of lung cancer. He was living in Peredelkino at the time of his death.