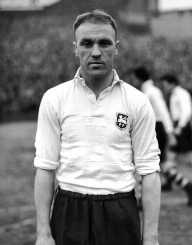 Bill Shankly was born on 2nd September 1913, to John and Barbara Shankly. His father was a tailor, but very sympathetic towards the unions, and this rubbed off on Bill Shankly He came from a large family of five brothers and five sisters. His mother had a keen interest in the football as two of her brothers played professionally, so this is where Bill Shankly cultivated his interest in football.

Shankly was born in a small coal mining town which only had a population of around 700. He left school in 1928, and at the age of 14, began to work in the mines. Along with one of his brothers, he worked in the mine for two years, after which time the mine closed and Shankly was out of work.

Both as a child and a coal miner, Shankly played football whenever he could, and would sometime go to larger towns in Scotland like Glasgow, to watch the professional teams play.

Shankly’s keen interest in the sport saw him practicing constantly, and it was only a few months after he got laid off from the mine, that he got signed to play professionally.

Shankly started by playing for a couple of local teams, then he was signed by Carlisle United and played the 1932-33 season with them. He was happy with the wage he got paid and also that the team was nice and close to home for him.

At the end of the season, the club called him in, as another club, Preston North End, wanted to sign him. The deal was done, but it took some convincing by one of Shankly's brothers before he would sign. Preston North End was a larger club, already playing second division, with the possibility of moving back into the first division. This was what eventually won Shankly over – short term pain for long term gain.

Although he started in the Reserves, he soon got promoted to the first team. He played regularly in the first team, and the crowds loved him. Preston North End made it back into the first division, and Shankly played for them until 1949, when he retired as a player.

During the Second World War, Shankly joined the Royal Air Force. He was 26 years of age and spent his prime playing years in the forces. He managed to play intermittently in wartime exhibition matches. He also took up boxing during his career in the RAF.

The full football season resumed in 1946, but Shankly was well past his prime by this stage.

He played until 1949 when he decided to retire. Carlisle United offered Shankly a coaching position, so he left Preston and returned to his old club.

As well as playing in the main leagues, Shankly also represented Scotland in several national matches between 1938 and 1943.

When Shankly took over the management of the Carlisle United team, he took them from 15th to 3rd in the space of two seasons. In 1951, Shankly took up a position to manage the Grimsby team, where he felt there was more scope for success. Over the next three years, although he worked hard, Shankly didn’t have the success he had anticipated.

A position became available at Workington, so he took it, as it was closer to Scotland. He only lasted a season, and then moved on to an assistant management position at Huddersfield. Initially, he was the reserves coach, but after 12 months he moved to management position of the senior team.

By 1959, Shankly was ready to move from Huddersfield. He had a very timely offer from Liverpool and accepted with delight. Shankly was with the Liverpool club from 1959 to 1974. He took the club to several FA cup victories

Bill Shankly met Nessie Fischer whilst he was serving in the RAF. Fischer was enlisted in the Women’s Auxiliary Air Force. They married in 1944. They had two daughters, Barbara and Jeanette.

In 1982, Liverpool erected 15-foot high cast iron gates, called Bill Shankly Gates in front of one of their stands. This was followed in 1997 by a bronze statue of Shankly outside the stadium.

In 2015, a hotel and museum were opened in Liverpool, and both were dedicated to the life and career of Bill Shankly.

Preston North End have also recognized Bill Shankly by replacing one of their stand in 1998 and having the new seats provide a head and shoulders picture of Bill Shankly.